Here's a Kit I picked up last June that I didn't start reconditioning until late Sept. and worked it here & there along with other projects until I finished it up a little over a week ago. I sure am glad to get this one done and all those parts out of the way...........

zambizzi said:
Hey, bermuda, I dig the arctic white kit...but I may be a bit bias:
Click to expand...

I change the background on my monitor frequently, but this kit has been on for the last couple of weeks. To me, this just exudes class.
Just a beautiful kit.
Phil
Ludwig Classic Maples Oyster Black Pearl. 13/16/22
1959 WFL 13/16/22
Zildjian cymbals
S

ludwigvondrumcrazy said:
Here's a Kit I picked up last June that I didn't start reconditioning until late Sept. and worked it here & there along with other projects until I finished it up a little over a week ago. I sure am glad to get this one done and all those parts out of the way...........

Beautiful job! I like that wrap a lot. Is that what is referred to as "bowling ball"--i.e. 70's version of Blue Oyster?

scott said:
Beautiful job! I like that wrap a lot. Is that what is referred to as "bowling ball"--i.e. 70's version of Blue Oyster?
Click to expand...

Man, I never get tired of looking at Ludwig kits!!

Lots of great stuff so far!
I'm a real sucker for Chrome-O-Wood and Natural maple.....

And one day, I'll get a Sabian 24" china like Bermudas!

Here's a couple pics of my Ludwig stuff in different configs.

This is the most recent set-up.

Same sizes as above, minus the side snare.

Here's how the double chinas were boomed in. Used on both kits.

Alex Van Halen recommended this snare to me.
It's signed on the inside by Bun E. Carlos

The BB with Imperial Lugs is a Bronze shell from '89.

Custom job because of the lugs, and only 10 lugs on this 8"
God...what a PAIN it was to get this thing done, but worth it in the end.
It sounds great.

Not a 'real' Black Beauty, but still pretty darn nice.

You have some really awesome drums. Love em! Post some sound clips or a link to your playing one of these days. You strike me as a guy who's been around the block a few times.

Take care.
Keepin it steady since 65.

Awesome drums Karl! I really love that red sparkle kit. What band are you playing in?
"Failing to prepare is preparing to fail". John Wooden

Thanks for the nice words on my kit.

Heres' a clip of me in an Ace Frehley Tribute band.
It's from a couple years ago, with the Sable Black kit.
We did it 2 years in a row for that place because it went over so well...and we got money !
The first few seconds is making fun of another Kiss tune, but the clip is the song Parasite.
The drums are un-mic'd.

I play in a group called Class Three Overbite.

I just do the live stuff, but the music has been pretty well recieved.

There's a MySpace Page, and stuff online about the group if you google it.
The 2 writers are Mike Elgert and Brad Jendza, & they both have pages/links, and I played in both those live bands too.

Last year CTO opened for Toto, The (new) Cars(on my birthday!), and did an Uncle Cracker show here in Detroit.

We also did a slot on the main stage at this huge July 4th festival in Mt. Clemens where I live.

There were other shows, but those were the coolest.

Not re-inventing the musical wheel, but it's real fun stuff to play...but there's no stick twirls in these clips dang it!

We went over real well with the TOTO crowd, and Simon dug us, and really loved the sound of my drums--especially the bass drum.

We went over real good with The Cars too, and they gave us a Pro shot DVD, but they had to sign a thing that we can't put any of it in the net, or use it for promotion.

Here's a couple clips from the Uncle Cracker show from YouTube.

This has some fooling around before the Cars show.

There's other stuff out there too.

here's some pics from a recent show we did with our bud's The Muggs.
They were on that "Americas next great band" show.

Thanks for the nice words again!

SmoothJazz said:
Yeah but I am just talking about DW. After 40 years, the sets aren't really great in number, and then there is only so many people on drummerworld so it is even a bigger stretch.
Click to expand...

Barry
...if you can't keep it civil, at least make it funny.

I think he's referring to "Drummer World".
"Failing to prepare is preparing to fail". John Wooden

Barry
...if you can't keep it civil, at least make it funny.

It must have been awesome to play on a show with Simmon and the boys. Toto was truly blessed to have two of the greatest drummers to ever live. Great band.

You sounded good. Looks like you guys had a good time.

Take care.
Keepin it steady since 65.

Karl - great videos, I love the band! BEAUTIFUL Luds! I think you singlehandedly convinced me to find a 26" kick for my kit.

tommapex, that SS looks great!
How is that wood side stick? They seem kinda cool.

zambizzi, yes, you should!

Steady Freddy, yeah Simon was really a cool guy, as were the rest of the band.
They were very complimentary, and were asking if we got everything we needed, so that was cool of them.

Simon even came off the bus to talk to me.

He said he sent his tech to look for me to bring me back behind the kit for their show, but the way they have you load out at that venue makes you have to go back in through the front.
The drum tech saw me after words and said (& the guitar tech too) "Dude, Simon sent me to look for you!"

So I wasn't able to watch him from the back, but, from the front was pretty dang cool!
He kept saying "Next Time".

He came up from his downstairs dressing room, because he heard the bass drum, and was giving me the "thumbs up".

He watched the first and most of the second tune (I know taking time out from his warm-up, because there was only about 20 minutes or so between the time we were done, and when Toto went on).

He was very complimentary and said he LOVED the sound of my bass drum, "Just F*ing great" were his words, shaking my hand, and then asking me how I muffle/tune it, and stuff.

Here's a couple pics of Simons kit I took...even though it's a Ludwig thread....

My kit looked kinda small next to his haha!! 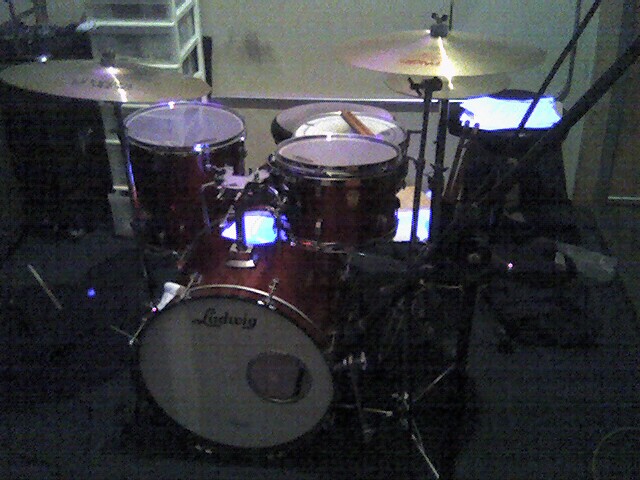 volvoguy said:
I'll bite! Finally got the Ludwig's out of the closet. Bought the classic maple bass and toms new in 1997, the snare is a 1967 Supraphonic.

How long have they been in the closet? They look awesome!! What are the sizes?

ThroneAmbition said:
How long have they been in the closet? They look awesome!! What are the sizes?

Thanks! Can you tell that Mitch Mitchell partly inspired that kit when I ordered it 10 years ago?

They've been in one closet or another for the past five years as I've been bouncing around town here, not really having much chance to play because of roommates, neighbors, and whatnot... also slightly frustrated with the music scene here.

If I were to do it again, I'd get a 14x14 in there instead of one of the 16x16's... and probably a smaller bass drum either in diameter or depth. I've always loved the two on the floor config. Maybe a blue or green lacquer finish.

Your kit is pretty sweet too!
-Ryan

Never was a big fan of Ludwig, but I really like these.
I know there were more pics.

This isn't my kit, either. I found it on eBay.