Well, it seems the offspring of the guy who produced such great albums as One Size Fits All, Roxy and Elsewhere, Hot Rats, Apostrophe, Overnight Sensation, Joe's Garage and others have sold their father's home complete with the Utility Muffin Research Kitchen. The buyer? Lady Gaga. I find this disturbing for several reasons. Clearly the kids have not been able to establish themselves in careers of their own to be able to retain the home amongst them. That by itself isn't all that unique however. But knowing that the home and studio of a guy who was so diametrically opposed to the corporate takeover of music has been sold to someone who is quite possibly the epitome of someone who is a product of that very establishment is hard to accept. This is just more bad news added onto the news of Chick Corea's untimely death. 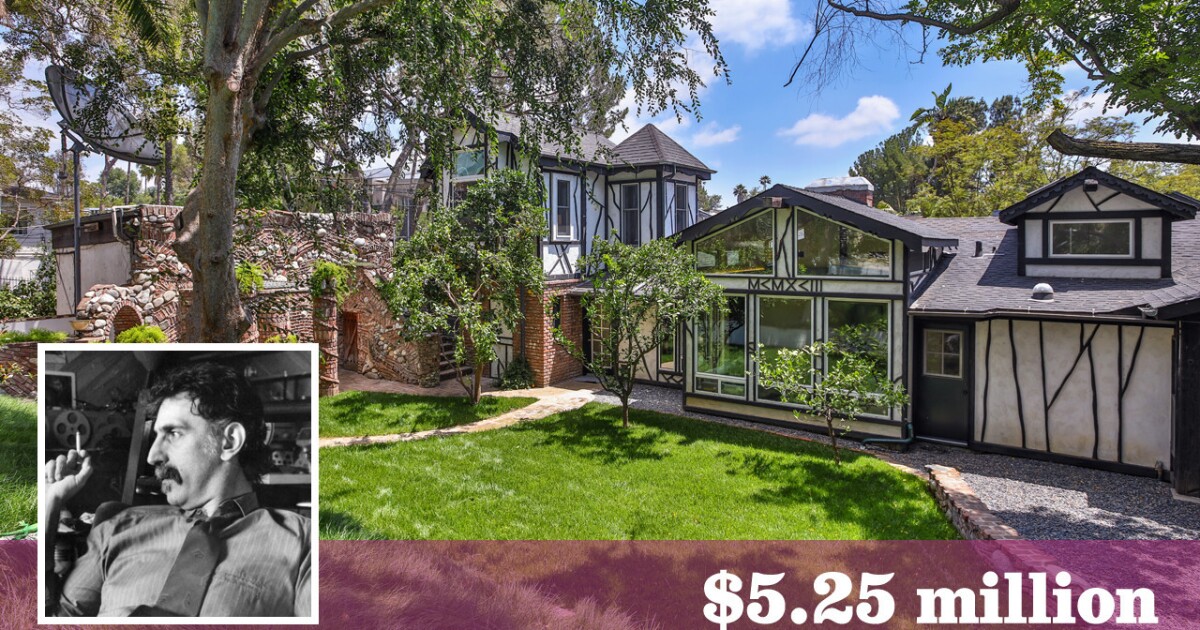 The Hollywood Hills West estate where late the late experimental rock musician and composer Frank Zappa made his home for decades has sold for $5.25 million.

Everything has a price, and a buyer eventually. Many a family home is eventually let go.
As for Gaga, I am no fan of her music whatsoever but I think as a musician she is the real deal and was likely attracted to the history of this place...unlike Zappa's own kids I might add.
Louis

MntnMan62 said:
Clearly the kids have not been able to establish themselves in careers of their own to be able to retain the home amongst them.

The Hollywood Hills West estate where late the late experimental rock musician and composer Frank Zappa made his home for decades has sold for $5.25 million.

Well, Moon (now 53) has worked fairly regularly over the years, as has Dweezil. I don't know anything about the other 2. There is a complex trust document that governs the estate. I can fully understand that there may be very good reasons for them to sell the house.
I'd rather see it go to LG than a developer. One hopes she'll find a creative way to preserve his memory.
Sakae Almighty (18x2/13/13/14) w/ Zildjian A's & K Custom Hybrids
Sonor Bop SE (18/12/14) w/ Dream Dark Matter cymbals
Gretsch, Slingerland, Pearl, Tama & Mapex snares

I would say the work of Moon was sporadic. Dweezil really hasn't done much more than playing his father's music with ZPZ and it's varrious interations. Ahmet? I consider him a talentless blowhard. The Hologram Tour was ridiculously disappointing. The band was decent but I would say Scott Thunes is probably FZ's worst bassist ever. Haven't heard anything that Diva has done. I understand that all things must come to pass. And yes, I'm happier that it went to a musician who "may" appreciate the legacy that exists in that place. I'm just pointing out the irony involved with Zappa and corporate music culture. Of all the kids I think Dweezil was the most successful at finding a regular gig even if it meant attempting to repicate his father's music. Frankly, I felt that Dweezil was successful in putting a good band together that was able to do justice to his father's music. That Ahmet and Gail went after him was absolutely ridiculous. I guess many, if not most, families have their share of disfunction. I know mine does.
1975 Slingerland Stage Band, Poplar/Mahogany, White Marine Pearl (20,12,13,14, plus 16 Premier)
1999/2000 Yamaha Stage Custom, Mahogany/Birch/Falkata, Sapphire Blue (22, 10, 12, 13, 14, 16)
Zildjian/Remo
"Absurdity is the only reality...." FZ

It’s just “stuff”...in the grand scheme of things it doesn’t matter...people matter... if my lad needs/wants to sell my junk when I’m gone I’m all for it!!
P

Al Strange said:
It’s just “stuff”...in the grand scheme of things it doesn’t matter...people matter... if my lad needs/wants to sell my junk when I’m gone I’m all for it!!
Click to expand...

Yup, it's not like they're doing anything weird with the catalog. I could care less who owns it, what his family does, etc. He is one of the greats, end of story.

So kids are just supposed to keep their parent's stuff forever?

I'm sure before this article got published, near-zero Zappa fans even knew this house was still in the Zappa family.

I also fail to understand this fallacy that permeates our culture, in both entertainment and sports, that the children of someone's talents somehow automatically inherit that talent and must live up to that reputation. On the surface, it makes no sense, because if it was true, then Frank Zappa (or insert any other music or sports legend) should be no more or less talented than his own father was. Yet, being more talented than their parent is why they became famous.

Nice house. Wish there were more pictures of it.

As far as who owned or bought the house, I could care less. It's just a house.
Grease or The Bird, which is it? Someone please tell me, what is the d@mn word?

Tons of photos on Zillow:

You guys are aware she bought it in 2016 right?
There is no right or wrong in drumming. There's only right & left. S. Jones

Wow, very nice house indeed. I dont agree with some of the wallpaper or appointments, but still gorgeous nonetheless.
Grease or The Bird, which is it? Someone please tell me, what is the d@mn word?
G

At first I thought we were talking about the log cabin on the corner of Laurel Canyon Blvd. and Lookout Mountain. But that was torn down in the 80's perhaps. Houdini's was across the street.
Last edited: Feb 14, 2021

I think that even if the beyond impossible were to happen and I ended up with Bill Gates-levels of money, I still wouldn't have white unholstered furniture. Too many years of child-rearing to not just tempt but guarantee fate for that to ever be a thing for me.

But my GOD the cymbal collection I'd amass...

prokofi5 said:
Yup, it's not like they're doing anything weird with the catalog. I could care less who owns it, what his family does, etc. He is one of the greats, end of story.
Click to expand...

drummingbulldog said:
You guys are aware she bought it in 2016 right?
Click to expand...

Sorry guys and gals. I didn't bother to look at the date of the article. Old news. But my point about Gaga buying it still stands. It's just irony that I was pointing out. I don't have any skin in this game. The family can sell to whomever they wish. It doesn't matter that their father was in a constant battle with the large corporate music houses and that Gaga seems to be a product of the large music houses. Ironic. That's it.
1975 Slingerland Stage Band, Poplar/Mahogany, White Marine Pearl (20,12,13,14, plus 16 Premier)
1999/2000 Yamaha Stage Custom, Mahogany/Birch/Falkata, Sapphire Blue (22, 10, 12, 13, 14, 16)
Zildjian/Remo
"Absurdity is the only reality...." FZ

Dweezil and Ozzy covering the Bee Gees: priceless
Lady Gaga: actual musician, and hey, she was cool enough for Tony Bennet to record with.
-Pride is the enemy
Premier XPK 10,12,14,22 in orange oyster
Zildjian 18 A fast, 16 A thin, 22 K organic, 14 New beats

No need to apologise mate, was a good chat!
B

Was it just a house?..in the bitter end I understand that but is there no sentiment about where Frank lived..wrote music..felt happy about his living space sharing his life with people he was close to. Where a person dwelled is kind of a special thing. Who it is sold to is a concerning thing (to me). I'm overly sentimental..that might be a problem..sometimes you have to move on. I enjoyed reading the viewpoints to this. Life..and it's various angles happening on the forum here..love it.

DrumEatDrum said:
So kids are just supposed to keep their parent's stuff forever?
Click to expand...

I sure hope not. I hate it when my elderly parents give me gifts of knickknacks & tchotchkes then look for them when they come over. It's like the "Emily Gilmore syndrome" from Gilmore Girls. When the grandmother came to visit, Emily had to haul all the gifts her mom gave her out of the basement so the mom felt appreciated & loved.
Funk Dat!