Will deep bass drums ever make a comeback?

Correct me if I am off here, but the deep bass drum craze...I'm pretty sure this is the first time in the hundred and twenty some odd years of the modern drum set, that set bass drums have gone that deep, like 18" and over. Open for corrections there. But if that is correct, OK we tried the deep kicks this time around, but IYO, do you think that deep bass drums will ever make a comeback? I can feel the tide shifting back to a traditional depth bass drum depth.
Opinions only obviously, I'm interested to hear your take on this.

Probably ....... everything comes round again eventually doesn't it!
For me, 18" is just normal. 20 and 22 are 'deep'.
I think SJC and OCDP were the instigators in my era. And with extended hoops in some cases too?
I'm currently playing a 16 but have only ever had 18's in the past.

I made this some 7 years ago or so... I managed to sell it and luckily it hasn't come back...

Staff member
I don't gig, but if I did, it would take some real convincing that the sonic quality of those monster bass was so much better that I wouldn't mind hauling one of those around. Then of course there is the finding of a case for it.

In a word, yes, I'm sure they'll come back eventually. Pretty much everything seems to come in cycles.

Pearls and sparkles were everywhere, then died completely in the 80s and 90s, only to come back hard in the early 2000s. I feel like solid color wraps are just starting to come back, gaining some ground against the "vintage" wraps. Plus exotic finishes are becoming more popular, especially since engineered versions are making them cheaper, and therefore easier to get.

Most of these trends are started by wanting a new look; it's usually practical considerations that make the door swing the other way. Big kits went away in part because they're expensive and a drag to shlep around. Deep bass drums can look cool, but once again transporting can be a pain. But I'm sure they'll be back in force eventually. Even now they're fading pretty slowly, so who knows, maybe they'll never truly leave?

Grunt you sound like the Dos Equis guy. I usually don't drink beer, but when I do...

I admit I do like the sound of all bass drums, regardless of depth. But they do all have to be at least 20" in diameter

Lately, I'm really going for the sound of the 14" depth, in a big way. Visually, the deep bass drums are looking a bit re-diculous to me, even though I don't have a problem with the tone.

My tides are turning. I recently got a 20 x 14 segmented maple bass drum and hot damn can that thing punch. I have to think they knew what they were doing when the traditional sizes were first selected. 14" deep bass drums. 13" diameter rack toms. 12" diameter for the high tom not a 10" like today. The traditional sizes/depths sounds best to me.

If this forum is any indication, we're at the tail end of the 18" depth craze. The market hasn't caught up yet though because a large percentage are still 18".

18" depths may still be a great selling point to the unwashed masses though. If people keep buying them, it'll be interesting to see how long it takes companies to change.
Last edited: Jul 10, 2019
W

Winston Wolf astutely nails it in my opinion by saying "Most of these trends are started by wanting a new look; it's usually practical considerations that make the door swing the other way. "

When I was a teenager I lusted after a double bass drum Capelle Turbo kit along these lines after seeing IIRC the drummer of Trust using one and seeing an amazing press advert for one. 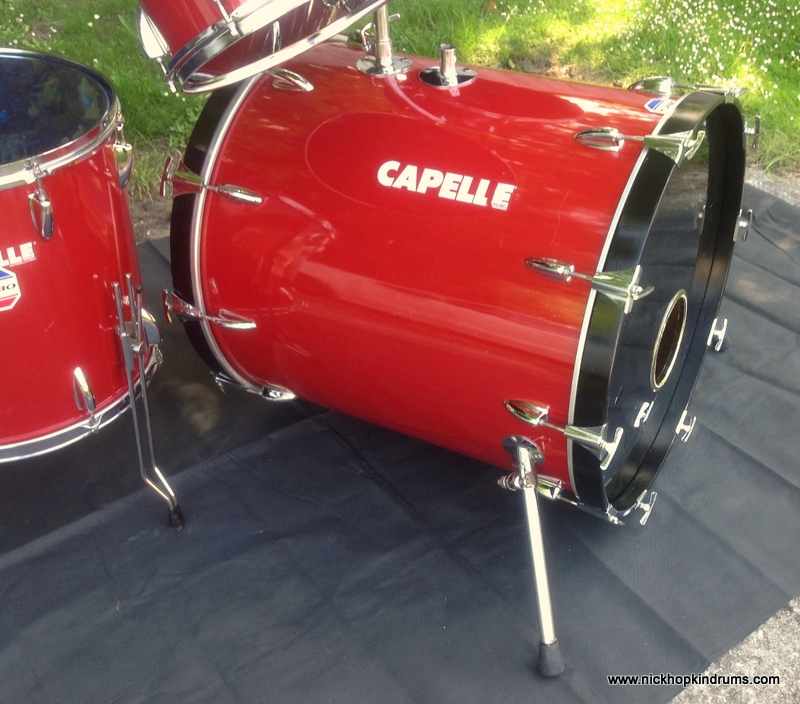 In later years I bought and sold a Mapex Saturn and to this day I maintain that if the 22" bass drum had had an 18" or less depth instead of the 20" it had I would most likely still have it. Growing up in the 80s it was the 16" depth that was coming through and both that and 18" I can live with. However having used a 20"x14" and now a 20"x16" I came to a conclusion that perhaps "they" got it right years ago with the "traditional" depths because I can get those depths to work quickly and easily. With the deeper drums I always felt that I was fighting them and getting a compromise.

That being said, If I had a vehicle and stage in and on which I could finally fit an 8 tom, double bass drum Capelle Turbo kit I'd foolishly do it because it just looks so cool.

Oh sure you will get a small percentage of bell bottom wearers, I'm not referring to them. I am referring to a national tendency for a large percentage of people to wear bell bottoms. In that regard, I don't think they ever made a comeback. Stupid deep bass drums like what Walopus showed lol are like the bell bottoms of the drumming world ha ha..

Hey I could be wrong, but in cases like this, only the good ideas make comebacks right?

Staff member
Hold on there Mister,

Whether or not they do, I've de-boarded (is that a word?) that train. I wanted the deepest, coolest looking, monsterous bass drums my money could afford. Once I got them, it was like meh. The coolness factor is lost behind the kit, the pedal response is slower, and no one wanted to help me move them. Some stages were too small to hold them. So I'm now back where I started, 14" depth. The monsters were 22x22. They were sold 10+ years ago, and I hope whomever has them now enjoys them.

I had a clear acrylic Spaun set in 2005 that had a 22 x 20 bass drum and I thought it sounded and recorded really good. It was met with a lot of resistance in my little blues world, and I ended up ditching it. The Spaun set is why in 2008 I ordered my DW's with a 22 x 20" bass drum.

Winston Wolf stated that most of these trends are started by wanting a new look. And I would agree with that overall. Which also raises the point of...what other instrument does that happen to, where their instrument is, in a way, subject to fashion?

Actually I think concert toms are the bell bottoms of the drumming world.

And they say rototoms are the mullet of the drumming world.

Well, electric guitars immediately spring to mind. Both finishes and shape are pretty much purely cosmetic and those aspects changed a lot in the MTV generation, just like drums did. While the wild colors and flying V styles have gone the way of pink Tama Granstars, I'd say their new battle is relic'd finishes. Something I'm SUPER glad (knock on wood) hasn't really hit drums.

When everyone has long forgot about what a pain the deep BDs were, they will come back. It's interesting how toms shallowed as BDs got deeper. Now toms are becoming super shallow and FTs going back to square sizes. I actually really like the FAST tom sizes. They seems to be in a good balanced range, not too shallow, not too deep, easy to carry around and offer a decent balance between sizes, by reducing the huge difference between rack and FTs. To me, something like a 22x14 fits right there with FAST tom sizes. Kinda surprises the monster deep BDs didn't come out in the 80s, when toms became cannons! Looks wise, that would have looked far more balanced than with the shallow BDs.

AzHeat said:
I actually really like the FAST tom sizes. They seems to be in a good balanced range, not too shallow, not too deep, easy to carry around and offer a decent balance between sizes, by reducing the huge difference between rack and FTs.
Click to expand...

My theory as to why fast tom sizes are taking over..... they sound deeper and fuller than shells from 15-20 years ago. 12x8 is the new 12x9 thanks to better shell construction.

What are relic'd finishes? Weathered or pre-aged finishes?