What Recording My Drum Playing Has Taught Me

I wish I had known just what an impact recording yourself has on your playing long ago. I'd been doing it with 8mm or VHS back in the day and by now I would be a drum demigod LOL or just given up more I think about it. Shocking is perhaps the best word to describe watching yourself the first time-so weird what you think sounds great behind the kit sounds like vomit in front or at a distance. You find all kind of fast intricate stuff you think sounds great really sounds like a dirty fart-something is lost in translation-too many notes. I'm continually amazed just how good it sounds to play solid and simple versus busy and noisy. Alas I'm a busy noisy guy so there lies the rub. but I'm slaying that dragon.

GetAgrippa said:
I'm continually amazed just how good it sounds to play solid and simple versus busy and noisy.
Click to expand...

Winner, winner, chicken dinner! You've conveyed a mountain of truth via one simple statement. In agreement 100%.

The AR16 arrived today.....bad photo attached. LOL! Still waiting for some other things to be delivered. Hopefully everything is here by Friday so I can start putting it all together this weekend. Going with a 10 mic setup. Keeping channels 1 & 2 open for guitars as both have a high-impedance setting to accept a guitar or bass directly. So all 12 XLR's will be used in one way or another.

Overall, for the price, this hybrid mixer-interface has a ton of features as I've read just about everything in the manual. Plus the build quality is very good. Not all plastic, only the side panels are. Feels very sturdy in your hands as well.

If I had to nitpick....the finger rests on the faders do have some horizontal wobble although nothing that's going to make a difference when using it. The vertical movement of the faders is smooth and solid.

I also prefer the design of, and the taller, tapered and thinner knobs on my Mackie to the short, thicker knobs on the AR16. And although the mixer has the ability to record to the built-in stereo SD card recorder, they don't include even low capacity SD card for those without one to allow testing right out of the box. Well, I guess you can't have everything at $599. SD cards are cheap.

I've read elsewhere of users complaining about the knobs wobbling but have not experienced this when turning them on the unit I received. You'd have to really push side-to-side firmly to get any sense of wobble.

Once I get everything setup and comfortable with it, will post an overall full review. I have a feeling it's going to be good. 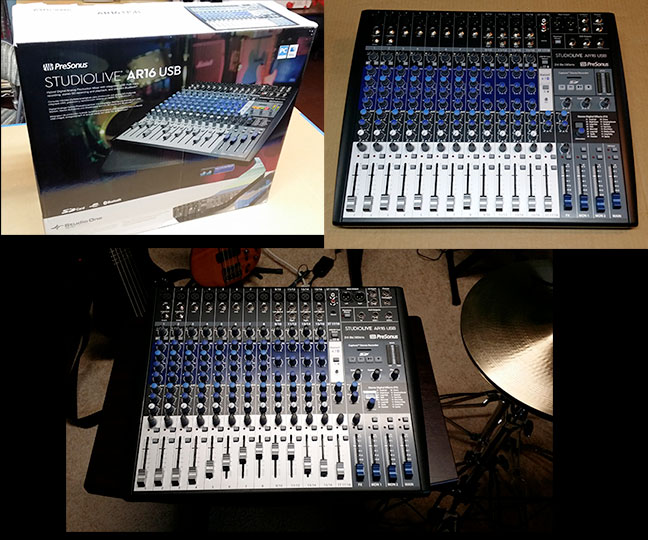 When I first started recording my playing it was definitely a big wake up call. I would say it's essential for all drummers to record their playing, even if the recording setup is only basic.

Hope you'e now managed to overcome the problem areas you noticed when you first started recording, I know that can be a very frustrating experience.
B

I constantly record my plying.

I'll be playing the fattest groove and be right in the pocket in my head. Then I watch back and am embarrassed at how off it sounds.

I often play with a click too. and I can see/hear/feel my fills rush on the recording. The video helps because you can sometimes see your own expressions or movements that may be causing it..


My band usual;y video's are gigs too. I find those are usually opposite.. I feel like I played awful, and looking back I played great. (fast, but good)


I recommended everyone do it, its humbling.

Just got the Zoom Q2n. Still messing with the camera settings and different angles. The video is average but the audio sounds surprisingly good.

I have to agree with all the others about it being an eye and ear opening experience. My biggest surprise was me playing a medium tempo shuffle beat. My time was all over the road. Ouch! That hurt.

I have a twelve channel mixer, a Presonus Audiobox USB, and some mics. i tried using a version of Studio One from Presonus, but just could not make it work with my Mac (it's an old free version),.
I finally ditched it and fired up Garageband and got it working tonight. I started trying to get the mix reasonable tonight, (much more work to do), but I'm looking forward to recording some stuff. I'm already discovering how much I suck. I hate when reality interferes with my fantasy world.
You must log in or register to reply here.
Share:
Facebook Twitter Reddit Pinterest Tumblr WhatsApp Email Link
Top