Hey, everyone! Thought it might be interesting to mention the very first drum kits we owned. Back in the day,
my first was a 5-piece Apollo in gloss white. Soon after, I scaled back to a burgundy 3-piece CB 700 set. Next!

Tama Swingstar in black.
Started with a six piece 10/12/13/16/22 with metal snare. Added a second bass the next Christmas (it was the 80’s). A double bass with three racks, one floor and a crap load of cheap cymbals.
I think I was 15 and was glued to that 80’s Tama catalogue back then.
Thats where it all began for me.
E

My first was a Yamaha Stage Custom in burgundy. I remember thinking the kit sounded great knowing nothing about swapping heads and tuning. I’m sure anyone within earshot of my beginner’s “skills” and untuned drums had some choice words for me.

Around 1991, my first kit was an early 80s Pearl Export that looked just like the one in the picture. It was already beat up when I got it, and there were plenty of quirks. Metal bass hoops, the toms didn't sound that great.....the toms couldn't be placed where I wanted them (this is where my hatred for Pearl tom arms began).....and the bass drum would constantly creep forward. But despite all this, I loved it.

I traded an old Musser M44 Vibraphone to my middle school to get it. In hindsight, the vibraphone is now worth much more, but I would do it again in a heartbeat. It got me started playing the drum kit, after all. For the 3 years up until that point, I had only been playing snare drum.

My parents bought me a Zildjian Scimitar Bronze cymbal pack. They were heavy cymbals that sounded about as good as they looked. 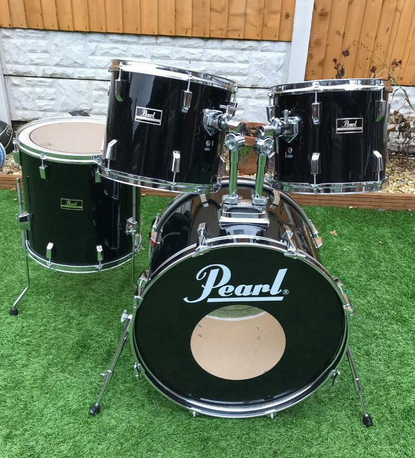 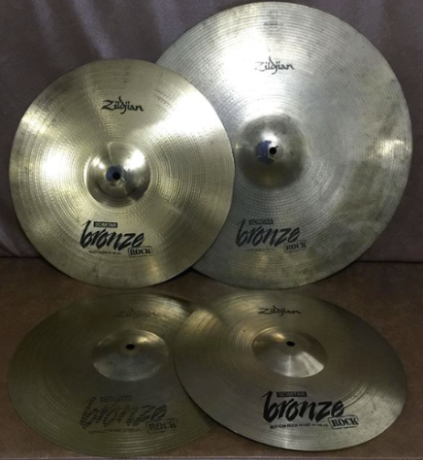 I don't have any pictures, but my first real kit mom and dad got for me when I was 8. It was a gold sparkle Slingerland from what looked like the 1950s. It was pretty dilapidated and it came with a 24x14 bass drum (that only had the batter head), with a mounted 13x9 tom (also with only one head). The snare drum became another tom (only one head) and I added my Japanese sky blue pearl snare drum that I already had to it. It came with a Ludwig Speed King pedal, and we later added a cheap hi-hat stand. The plus was the kit had 14" Zildjian New Beats with it. I later found another cymbal and put it on a stand for my crash/ride. I learned how to play on that thing from 1975-ish until 1979. Then the gear started getting better after that.

Ironically, this Christmas I gave my niece and nephew (both around age ten) my black Pearl Vision kit totally complete with throne, cymbals and all necessary hardware. Their parents deserve it

Late 60s MIJ stencil kit (PENNCREST) from JC Penney with the worst cymbals you can imagine. Red with black tiger stripes. Played many shows on that thing, only with borrowed cymbals. Even recorded an EP. Never heard a complaint about how they sounded. Maybe back then the bar was really low!

My first kit. . .wow, it was a pawn shop purchase I think? A Crestline, blue sparkle 5-piece. After doing a little research earlier this year, someone said from my description that it was probably late 60s early 70s. The snare was not original, and was definitely the best part of the set--a Pearl export in chrome (definitely Pearl, maybe not Export?). I also had the WORST cymbals (at least I sure thought so) Camber II's I think? Definitely Camber. The drums had no bottom heads, VERY 70s sounding THUDDY. I'm not even sure where the heck they went to. I thought I had loaned them to a buddy. . .Clueless as to where they ended up.
I

Royce 5 piece with a set of Camber cymbals. I learned a lot through trying to get the most I could out of that not so great set.

Staff member
1960's Gretsch WMP, bass drum and snare and a ride cymbal. I was ahead of the times.
V

Mine were from (drum roll) Montgomery Ward!...3 piece blue sparkle with a chrome snare. got a Bradley floor tom for my brithday a couple months later. I promptly took the res head off the rack tom (Hal Blaine's octo-tom sound was all the rage then) with new batter heads they didn't sound all that horrible
W

First (ex)wife made me sell it when we got married.

I had 2. My dad purchased a Slingerland Spirit 1000 kit in black for me around 1983-84. It was kept at my grandparents house. Their house got robbed, and the heads were slashed. My dad told me the kit was broken and it went in the closet. I was like 7-8 years old.

Fast forward to 15, living with my mom, I bought a silver CB700 kit from the 70s with money I had been saving. This was the first kit I had that I was serious about drumming on. I consider this my first kit.

The Slingy kit was pulled out of the closet, reheaded, and used when I moved back in with my dad. I consider it my 2nd kit even though I got it first. Being the child of divorce gets confusing and sucks.

Both kits had crap cymbals. Camber, MX100, that kind of crap. My hi hat cymbals were nice for a "lost" brand. They were West German cymbals, named like Krystal or something like that. Better than the rest of my cymbals anyhow.
W

A Premier Royale 12”, 13”, 16”, 22”x 14” and a steel snare that shouldn’t have come with the kit as it was a “better” model. I only noticed after a few days that two of the drums were a silky grey metallic and the other two were a silky green metallic. I’m guessing there was a bargain price involved so I never grumbled about it as I had a set of very decent drums as a result.

My first kit was a Slingerland Stage Band kit in white Marine pearl. It had a set-o-matic tom holder. My parents bought it at Manny's Music on 48th Street. These pics are not my kit but it's the identical kit to mine except it came with a white coated bass drum head. 20" bass drum, 8x12 mounted tom, 14x14 floor tom and a 5.5x14 snare .

I still have that kit but have added on to it. I was able to find a vintage Stage Band 9x13 tom with the set-o-matic mount already on it on eBay about 10 or so years ago. I use that set up along with a Premier 16x16 floor tom with WMP finish and a 10" roto tom. I've thought about having someone make a 7x10 tom for me with a closely matching WMP finish and with Slingerland Niles badges that I can buy on eBay so it matches better. And I'd love to find a 16x16 Slingerland floor tom in WMP, realizing that it won't have the same Stage Band center mount lugs. I suppose I should take a pic of my current set up. I've got Evans Hydraulic heads (blue) on the toms and bass drum but am toying with lightening things up and replacing them with Remo Pinstripes.
A

Mapex M Birch was the first

Gold sparkle Stewarts, 4 piece 20/12/14 with a matching snare. Christmas 1968. Thanks Pop. (In later years he told me that this was his biggest regret, buying me drums. It's when he "lost" me lol) I was 10 years and 12 days old and lost apparently. From the very first tom hit, I wanted to improve the sound I was hearing lol. That feeling has never left me either ha ha. I remember putting a Dr. Scholls moleskin patch (not made from real moles AFAIK) on the BD batter head and I also put balled up newspaper inside the toms. How I knew to do that escapes me.

They were the clear maple shells with re-rings, pointy badges. I also had one of the original Tama Bell brass snare drums a few years later.

My poor old man didn't know what to think when the music store called to tell me my set was ready to be picked up. He was suspicious of me because I made enough money to buy a brand new $835 dollar drumset without any apparent job lol. I had just gotten kicked out of HS for my business activities too. He begrudgingly drove me to retrieve the set in his blue 1975 Ford pick-em-up truck.

My 3rd set I went custom with a set of Eames. I found their little ad in the back of a Modern Drummer magazine. I drove up to Massachusetts to meet Joe MacSweeney and I liked what I saw, so I ordered a set. That was spring 1982. I was 23. I still have the Eames. The Ludwigs I practically gave away because I hated them.
Last edited: Jan 2, 2020

Have no clue what the brand of the kit was, my guess of age is 70's/early 80's 5 piece kit with a brown oyster wrap finish, and a Tama Swingstar steel snare. Got it from my first drum teacher at the age of 8 back in 1992. Not a clue on the cymbals either, all beaten up, branding had worn off. Sounded bad, but it helped me on practicing rudiments on something else than a pad in the first 2 years of drumming while I learned drumming in the school marching band (until my father bought me a Yamaha Power V Special, I was in 7th heaven then!).
You must log in or register to reply here.
Share:
Facebook Twitter Reddit Pinterest Tumblr WhatsApp Email Link
Top