Stupidest/Most Embarrassing thing you've ever done to your drums

First things first, here is your safety pod where no one can judge you or say mean things (but they can still laugh):

1. When I was playing around with my set-up, for several months I mounted my ride cymbal almost sideways really, really high. I thought that being able to see the underside of it from the front of the kit would be really cool and it would it also get it out of the way of my toms (3 up, 1 down at the time). It was actually pretty easy to reach, but it was quite overwhelming if you stood in front of the kit because 100% of the sound went forward. After a few months, I put it back down.

2. When I first got my drums, I used those Remo foam rings under the BATTER side of my drums.

I might as well had played pizza boxes. Wow, they sounded like crap. In my defense, I was new, and my Tama Rockstars (early 1990's) came with those cheap, single-ply heads that matched the reso side.


3. During performances, if we had lights, I would pour water on my drum heads. It would give a pretty cool effect, but looking back, it was really really dumb. Here's a picture of the effect (but this isn't me). 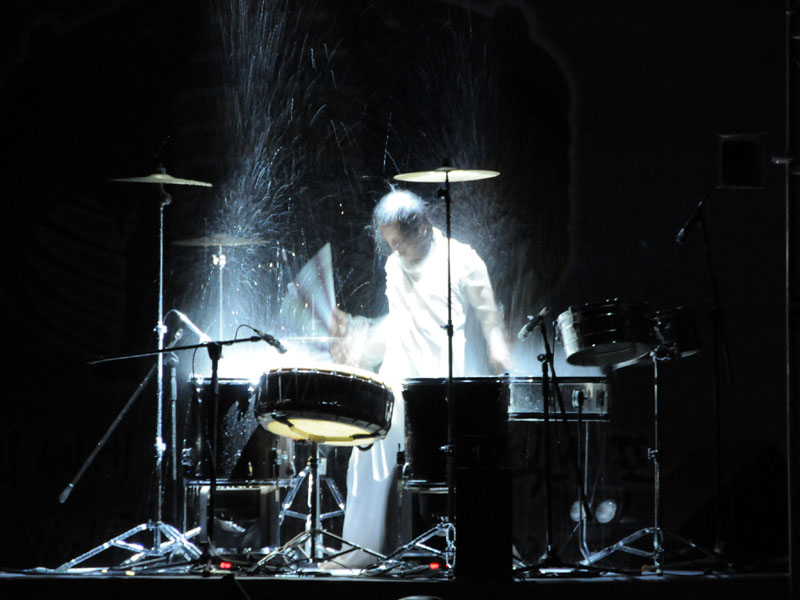 
I'm sure I'll think of more later. How about you?

The stupidest thing I can recall doing, was selling my Sonor ferromanganese snare drum.
(to pay girlfriend's electric bill for her). I can't think of anything more stupid at this time.

I painted my best handmade rendition of the Rogers logo on my MIJ gold sparkle Stewarts bass drum reso. I was 11, that's my excuse. Not nearly as stupid as having vertical ride cymbal

I'm pretty boring, I just kind of play the drums and don't do anything wacky to them. No glitter on the heads, no wallpaper finish jobs, no trigger lights, no goldfish in my clear floor tom. Terminally boring, that's me. I used to kick my set over for a finale when I was in phase 1 of my musical journey.

Deadringer muffle rings from the early 80s (?). basically these 1" thick foam rings w/ sticky tape. you stick them to the underside of your tom heads. at the time, i was running 12, 13, 16 Slingerlands with those BAD ASS Ludwig Rocker heads (mirror control sound dots) and no bottom heads. these Deadringers took the drum from THUD...to "DUTT!". Evans Hydraulics had way more tone, just a ridiculous amount of muffling. Then later, i tried to remove them...left chunks of foam on the underside of my BAD ASS Ludwig Rockers. ugh. i think the Remo Muff L foam / trays now the modern replacement. 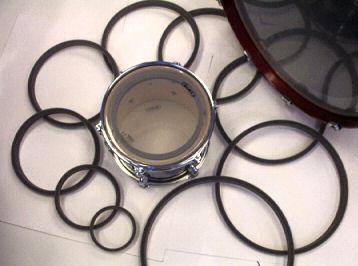 After watching Alice in Chains unplugged set, and the video for Bulls on Parade, and seeing the guitarists having something cool written on their guitars, I got painters tape and wrote song lyrics on them and attached them to the shells

It'd be awkward as hell when someone would come see the kit and read aloud "I get nervous perverse when I see her its worse" (Vermillion by Slipknot). Other variations of this teenage angst included writing on my snare drums various curse words or sexual innuendos, which likewise gets awkward when your mom has to drive your set over to your buddies house cus you cant drive yet.

Course I keep the tradition (somewhat) alive. This round of heads I have a german poem on one snare head, a Nietzsche quote on the other snare, and the toms have the chemical make ups of different psychedelic drugs drawn on them.

Jeremy Bender said:
The stupidest thing I can recall doing, was selling my Sonor ferromanganese snare drum.
(to pay girlfriend's electric bill for her). I can't think of anything more stupid at this time.
Click to expand...

Damn man, my sympathies. I hope your still with her

I put pinstripe heads on a tom once.
Oh ya, I sold a pre-serial PAiste 602 ride cymbal, just to justify buying another cymbal. Stupid little money games I play. Little did I know drummers could collect cymbals.

I took all the resonate heads and hoops off my toms and kick back in the 70s which is mainly stupid cause then I lost all the rims and lugs.

I muffled drums with copious amounts of electrical tape, duct tape, and even pieces of other drumheads.

I sold a Ludwig Pioneer.

I played a piccolo snare as a main snare in the mid-90's when I thought that was cool.

A very, very nice upgrade in cymbals between the first and second videos!


opentune said:
I put pinstripe heads on a tom once.
Click to expand...

Wow, I can't stand the sound of them, and I can't believe how much money I blew on Pinstripes during my first 10-12 years of drumming.


alparrott said:
I played a piccolo snare as a main snare in the mid-90's when I thought that was cool.
Click to expand...

Me too. A Pearl black steel 13" piccolo. I think I was listening to way too much 311 and various ska bands back in the day.

Staff member
You won't believe this but I once used Remo heads on my drums.

GRUNTERSDAD said:
You won't believe this but I once used Remo heads on my drums.
Click to expand...

haha, good one. Is it just me, or has your sense of humour doubled since being retired?
M

Back in the late 70s I took all the grey pearl wrap off a classic Rodgers kit. Took off the bottom lugs to make them power toms and covered the kit in black wrap. To add insult to injury I used oil filled heads on all the drums. I am stll ashamed of what I did to the formerly beautiful kit. In my defense it was the way to go back in the day.

opentune said:
haha, good one. Is it just me, or has your sense of humour doubled since being retired?
Click to expand...

He just needed a jump-start. lol

The most embarrassing thing for me was using sanitary napkins stuck to the inside of my metal shelled-snare drum in an attempt to make it sound like a wood-shelled drum. I used a clear black dot head at the time. Yeah.

I recently talked to a drummer friend of mine whom I hadn't seen in 30 years, and he STILL remembered those damned Kotex pads...

Very early on in my playing days - maybe a few months in, playing with my first 'band' - I was playing with one broken crash and one cheap-but-healthy crash. Under my troglodytic early-drumming frenzy, the cheap crash broke before too long.

One of my band members was so stupid he suggested that I stack both cymbals on one stand; two half-cymbals makes a full one, right?

I was so stupid that I tried it.
G

I traded a guitar setup for my second set of Ludwigs, which was super smart, but the embarrassing part is playing many shows... with black spandex covered drums.

You could pinch it and pull it away from the wood and when you let go,it would snap back and dust would fly everywhere.

At the time I had it I just started playing and had no idea ..

double_G said:
Deadringer muffle rings from the early 80s (?). basically these 1" thick foam rings w/ sticky tape. you stick them to the underside of your tom heads.

+1 Same here. To add insult to injury, I put them on eight concert tom heads. What was I thinking?

I thought of another - sort of.

I used to use a kit with 6 concert toms. I used black dot heads on them, with a square of folded up paper towel taped to each head. I increased the size of each square as tom size increased.