Al Strange said:
I think my face is a mistake and my playing acknowledges this… One of my biggest heroes is Rod Morgenstein who constantly gurns whilst playing perfectly executed beat displacements; very misleading for those who like to spot a mistake. The king has to be Mick Fleetwood; now that’s a mistake face if ever I saw one!

You made me look up “gurns”. Google caught it, but autocorrect didn’t. I didn’t appreciate that.
"The piano ain't got no wrong notes." - Thelonious Monk

iCe said:
Beat me to the punch xD
Click to expand...

Jeremy Bender said:
A study observing the psychological effect on the listener that observes a performer making a mistake...


Why Every Performer Needs a Good Poker Face​ 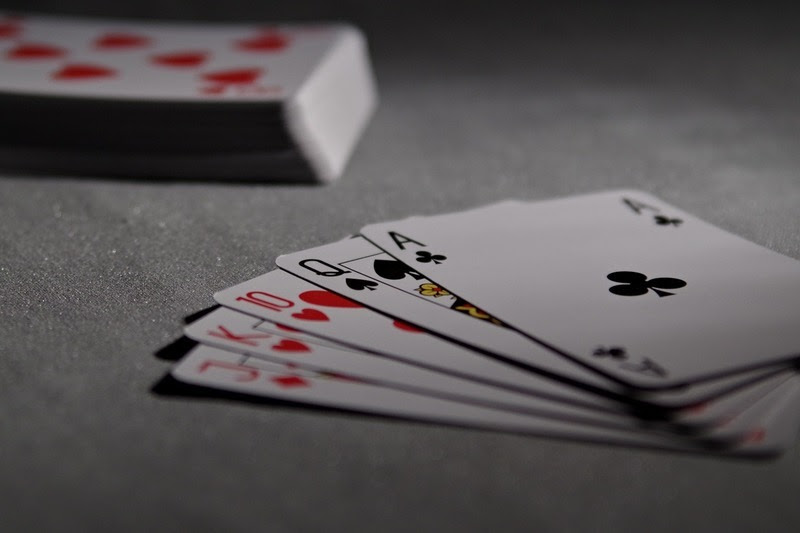 Why Every Performer Needs a Good Poker Face​

by Noa Kageyama
My daughter loves card games. And what I enjoy most about playing with her, is how completely transparent she is. Anytime she gets dealt a good hand, or picks up a special card, it’s written all over her face. Her eyes light up, and I know something bad is about to happen to me.
In time, maybe she’ll develop a better poker a better poker face, but for now it’s pretty cute.
And maybe not all bad, because when it comes to performing, research suggests that this sort of emotional expressivity is an important part of communicating from the stage. But…there’s a flip side. Where we frown and scowl, or express frustration when the performance isn’t going well.
We’ve all had teachers tell us to avoid making such faces when we’ve made a mistake, but really, as long as we sound great, how big a deal is it really?


The visual impact of what we do on stage​

A number of studies in the last few decades have shed more light on questions like this (like this one that caused quite a stir), suggesting that what we see affects our evaluation of a performance more than we might like to think. And researchers George Waddell and Aaron Williamon at the Royal College of Music’s Centre for Performance Science recently conducted a study to look at two specific visual aspects of a performance – first impressions, and facial expressions in response to mistakes.


Same performance, but with a few tweaks​

53 musicians and 52 non-musicians were recruited, and randomly assigned to one of several groups. Each group was to watch and evaluate video of the same performance of Chopin’s Aeolian HarpEtude, but with a few slight modifications made to each video.
Participants in Group #1 and Group #2 watched an error-free performance. However, while Group #1 saw the pianist walk on stage confidently, Group #2 saw the pianist walk on stage with poor stage presence (hands in pockets, barely looking at the audience, not smiling, etc.).
Groups #3 and #4’s videos both used the “good” stage entrance, but in their videos, the pianist makes a pretty major mistake. Midway through the piece, he flat-out stops and fumbles around for a moment before resuming the performance – noticeable even to the non-musicians. In Group #3’s video however, the pianist makes a face, shakes his head, and looks frustrated in response to the mistake, while in Group #4’s video, he has no discernible reaction to the mistake at all.

The participants were asked to rate the quality of the performance, as if they were judging a competition.
But to get a sense of how quickly we form first impressions, and how our impressions change over the course of a performance, the researchers used an interesting “continuous” rating system. Where instead of waiting until the very end to ask participants for a score, participants were allowed to rate the performance from the very beginning, making adjustments to their score from moment to moment, as their opinion of his playing changed. 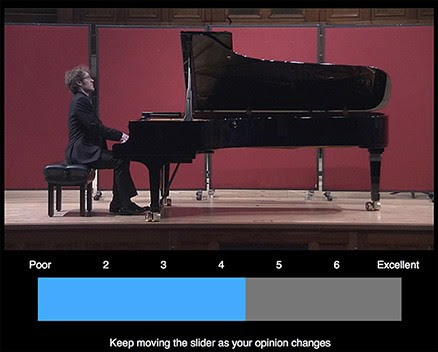 From Waddell, G., & Williamon, A. (2017). Eye of the Beholder: Stage Entrance Behavior and Facial Expression Affect Continuous Quality Ratings in Music Performance. Frontiers in Psychology, 8.
So how much does a performer’s stage entrance, and facial reactions matter?


The impact of a poor stage entrance​

But even the musicians didn’t seem to hold his poor stage entrance against him for long. By the 25-second mark of his performance, his performance rating had already recovered and was on par with the score he got from musicians who watched the video with his good stage entrance.
So while first impressions may have some impact and shouldn’t be ignored, perhaps the way we walk out on stage isn’t quite as influential as we may have thought. Or at least, it’s something we can overcome as long as our playing is at a high level and we exhibit good stage presence while playing.
So what about mistakes, and making faces in response? Is it possible that this too is not as big a deal as people say it is?


Audiences may be surprisingly forgiving​


Why did this happen?​

So why are both musicians and non-musicians more likely to forgive a mistake when it isn’t accompanied by a look of frustration?
The authors note that when we interpret facial expressions, we don’t just intuit the person’s current mood, but also make generalizations about more stable characteristics and traits. So when we see a musician expressing frustration at making a mistake, instead of interpreting this as a random mistake, the expression of frustration may lead us to conclude that such mistakes are habitual, and that this is a musician who routinely struggles with consistency.

As usual, it seems that our teachers were totally right. Making a mistake is not the end of the world, and an audience is often much more forgiving than we give them credit for being – so long as we can keep our face from giving us away and ruining the experience for them.
Would an audition committee or competition jury be as forgiving? That’s hard to say, but it’s probably a safe bet that maintaining your poker face is a better way to go, no matter how many mistakes you find yourself making on stage (or alternately, I guess you could make sure everything is a “hole-in-one,” ala Happy Gilmore).

If you’d like to geek out about this some more, the full paper and all five videos are online here:
Eye of the Beholder: Stage Entrance Behavior and Facial Expression Affect Continuous Quality Ratings in Music Performance (paper)
Supplementary Material (videos, etc.)
Or, if you only have time for the highlights, the researchers have distilled the videos down to 88 seconds here:
Does stage behaviour matter?
Found this article helpful? Here are two more things you might like:

I do one of two things:

1. Look at the bass player like they messed up

2. Make one of those heavy jazz face/groans like I'm just pushing myself to the limit and trying to modulate time or something super heady and people are like "yeahhhhh"