I suddenly own this 6-piece Yamaha Tour Custom

This 6 piece Yamaha Tour Custom (22/10/12/13/14f/16f) in MINT condition was on FB Marketplace for months and months. He was asking $1300 which was a fantastic deal, but nobody bought it. He then lowered the price to $1150. After a week or two it was still there. The 'Rona has really made it tough to sell drums in my area. So then yesterday he dropped the price to $1000 and I couldn't resist any longer.

I don't NEED a new drum kit but shut up it's a great deal ok get off my back. The guy could not have been cooler to talk to about drums. I asked what his favorite kit is...he said "I rotate". He frequently buys mid to high end drums, plays them, then sells them...rinse repeat.

I brought them home and set them up, but by that time it was too late to drum (after 10pm). So I have to wait until tomorrow to try them out.

Initial impressions: better than expected. The fit and finish is perfect. PERFECT. I'm a big fan of matte finishes, and I really like this Candy Apple Satin finish. Despite being a somewhat flashy bright red color, it somehow manages to be understated and classy.

The drums are light, which is a nice change of pace from my Gretsch Renowns. I really like the minimalist hardware because it ultimately saves weight. The YESS mounts are compact and lightweight. The tom bracket on the bass drum has a VERY small footprint (the smallest I've ever seen), and the same goes for the bass drum spurs...they have a very small footprint as well, and yet they're still fully telescoping and adjustable. These bass drum spurs are much better than the not-so-great minimal spurs on the Ludwig Neusonics.

A smaller footprint means less weight. The entire kit was designed this way. All the lugs are single point, which means smaller lugs, and fewer screws in the shell. The floor tom leg brackets probably weigh half as much as my Renown leg brackets.

This makes me wonder why extra bulky hardware is so necessary on other drum kits. Bulkier=better seems to be the mantra. Maybe it's not necessary and just makes everything heavier? For no other reason than peace of mind?

The Tour Customs were not on my short short list when I was in the market for a new kit last year. It was close, but I kinda brushed them off. Seeing this kit up close has definitely brought them up a notch. I'll add more to this little 'review' once I get a chance to play them! 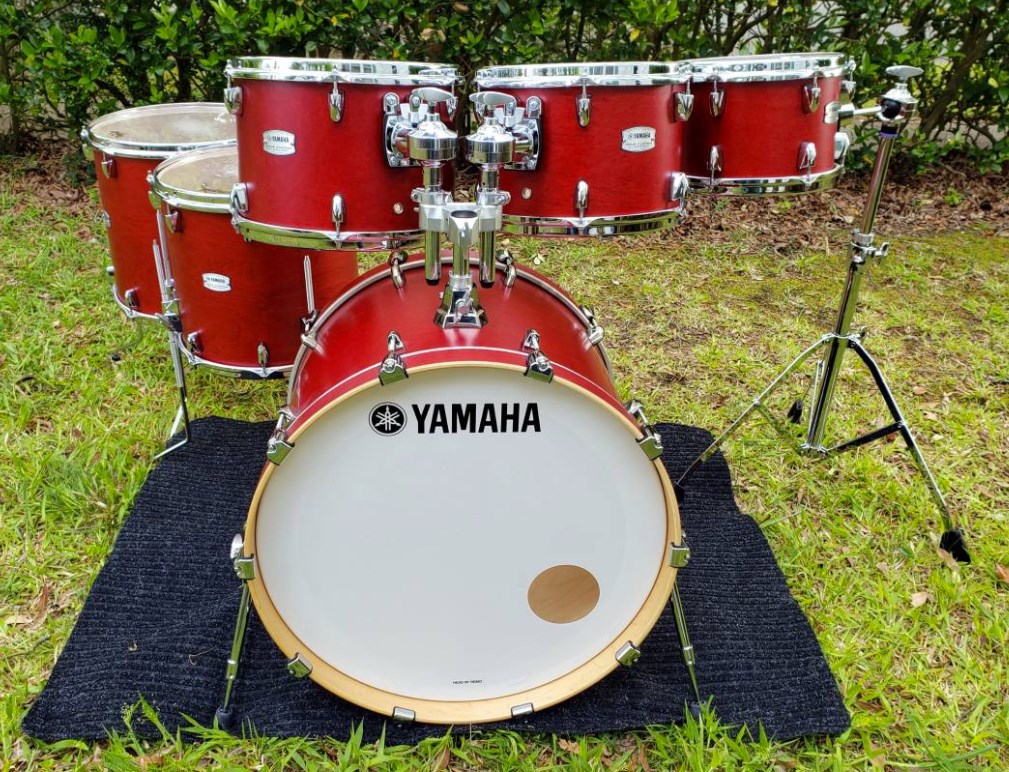 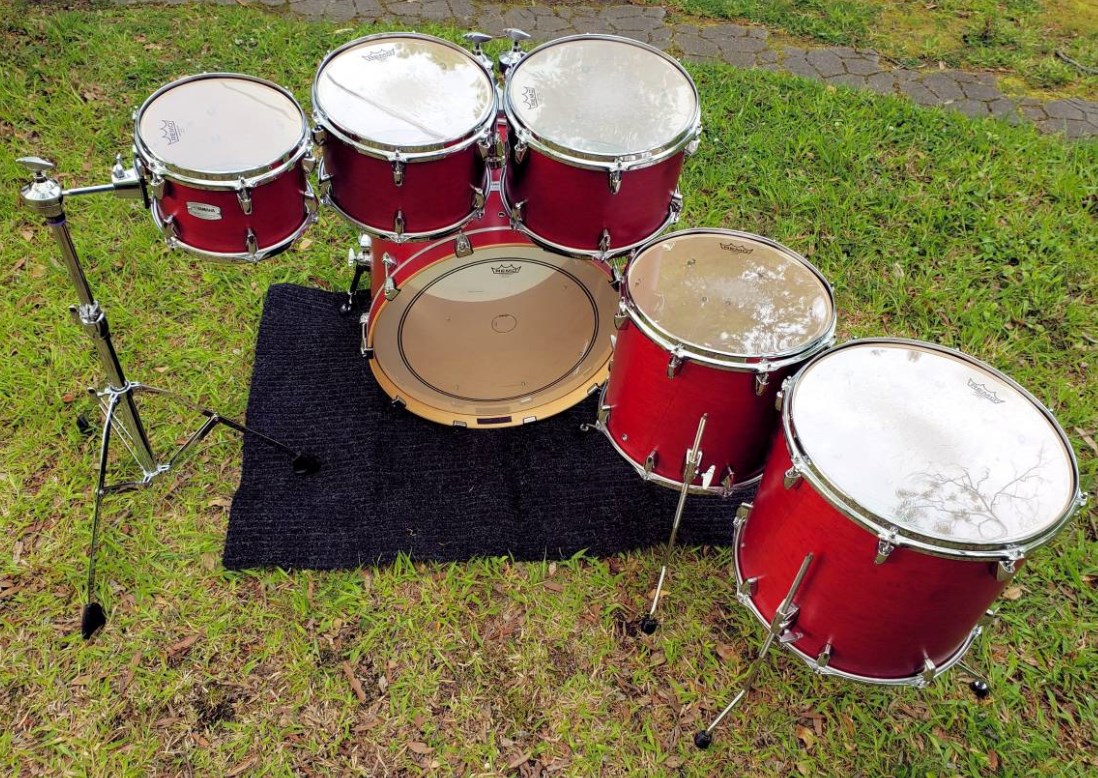 Wow, where to begin. This kit sounds phenomenal. I've put in 3 full hours of playing time on the kit so far.

Using my Renowns as a reference point, the Tour Customs have a slightly faster decay. Slightly more controlled, but still very full sounding. I'll have to do an A/B test, but I suspect the Tour Custom toms might be slightly quieter than the Renowns. But it's negligible.

It has Clear Emperors on all the toms except the 10" which has an Ambassador. I believe the TCs come with Ambassadors initially. @David Hunter, were the original Ambassadors not sounding as good in your opinion? I've read online of a few people who said the Ambassadors weren't cutting it so they swapped to Emperors. Was that your experience?

In any case, they sound amazing and I wouldn't change them back because the Emperors sound perfect.

I haven't tried a high tuning on the Tour Customs yet, but Emperors aren't great for high jazz tunings so I may have to swap them out for Coated Ambassadors first.

The Bass Drum. Wow! A big boomy sound, almost like a 24" bass, and with just the right amount of boom and punch and decay. It has a Remo Powerstroke 3. Muffling is totally not necessary, it sounds great wide open. I will experiment with a small towel inside at some point though for a tighter sound.

I took the head off the 10" tom to check the bearing edges. They're perfect and smooth, but not quite as smooth as the Renowns. (The Renown's edges are smooth like porcelain) But this is not a complaint...this kit is a few hundred less than the Renowns, and they're perfectly acceptable in my opinion. I still consider the Tour Custom's shell construction to be impeccable.

Don't get me started on the Satin finish. It's perfect. It's on par with a DW Collector's Satin finish from a looks standpoint. As for durability, I have no idea. I'm not about to put scratches on it to find out, haha.

20 years ago this kit would've cost $3000+ easy (just a 4-piece). It's shocking how far shell manufacturing has come. It looks and sounds that good.

I had preconceptions about this kit judging from the tons of Youtube videos I saw on this kit prior to getting it. I must say, they're a little closer to the sound of the Renowns than I thought. And that's saying something. But who knows, maybe this is the honeymoon period talking, haha. I'll definitely update my thoughts if they should change.

I look forward to doing a direct A/B comparison soon. That should be interesting.

That is simply beautiful.

Will all the happenings going on in America right now, go out and do something that makes you happy.

You have done extremely well in terms of cost.

Those pics make me wanna do a massive 8th note triplet drum intro to a rock ballad.

Excellent review! I'm really glad they went to you, Lee. I think you're gonna be very pleased with them. Like you said, perfect gigging kit. I never actually used them in the way pictured - my favorite configs were either 12/14/16/22 or 13/16/22. The 10" never got used at all.

It was good to meet you, and maybe a Sonor Prolite (or 2) might be in your near future.

If that's the seller I think it is, you got a great deal from a great guy.

Good score. I really like this "relative" newcomer to the Yamaha family.

Darth Vater said:
If that's the seller I think it is, you got a great deal from a great guy.
Click to expand...

Thank you Todd, and back at'cha my friend!

PS: My grey Prolites with snare are for sale. Just sayin'.

The Tour Customs embody everything good about the Stage Customs, and more. I think they will be a pleasure to gig with.

David Hunter said:
Thank you Todd, and back at'cha my friend!

PS: My grey Prolites with snare are for sale. Just sayin'.
Click to expand...

Are they listed anywhere? That's a heck of a nice kit.

Darth Vater said:
Are they listed anywhere? That's a heck of a nice kit.
Click to expand...

Don't tell me you're selling your Sonor stuff to buy a Stage Custom!

Somebody on here was looking for some Walnut Burst Prolites a while back. I'm trying to remember who it was.

Darth Vater said:
Don't tell me you're selling your Sonor stuff to buy a Stage Custom!

Somebody on here was looking for some Walnut Burst Prolites a while back. I'm trying to remember who it was.
Click to expand...

LOL! Nah, I'm just getting too bogged down with drums and nowhere to put them all. I've recently picked up an SQ2 in WBB, a Ludwig Aged Exotic in Tamo Ash, and a Doc Sweeney Birdseye Maple solid ply. Just no more room. I'd like to get down to 4 sets: the above 3, and my Vintage Series shell bank.

As much as I love the Prolites, they've gotta go to a new home. It's gonna be a fire sale. I'm ready to take a loss, just as I did on the Yamaha TCs that Lee just picked up. My wife has assured me that I will be a happier person when there's more room in the house.

Somebody's gonna get hooked up. I'm pretty much set right now with my Prolites and Saturn V kit. I'd like to see some pics of that Doc Sweeney kit!

Great drums! Suggestion, when mounting the 12" and 13" on the bass drum, turn the mount 180 degrees and then position the toms further down the arms.

notvinnie said:
Great drums! Suggestion, when mounting the 12" and 13" on the bass drum, turn the mount 180 degrees and then position the toms further down the arms.
Click to expand...

David Hunter said:
Excellent review! I'm really glad they went to you, Lee. I think you're gonna be very pleased with them. Like you said, perfect gigging kit. I never actually used them in the way pictured - my favorite configs were either 12/14/16/22 or 13/16/22. The 10" never got used at all.

It was good to meet you, and maybe a Sonor Prolite (or 2) might be in your near future.

Wow, that was you?! I've seen you on the forums before, it's a small world! I remember thinking as I was driving away, "I wonder if he's on Drummerworld" because you're a nice and knowledgeable fellow.

It was nice meeting you too David, and I look forward to seeing pics of those kits!

I think he means turning the tom mounts upside down? 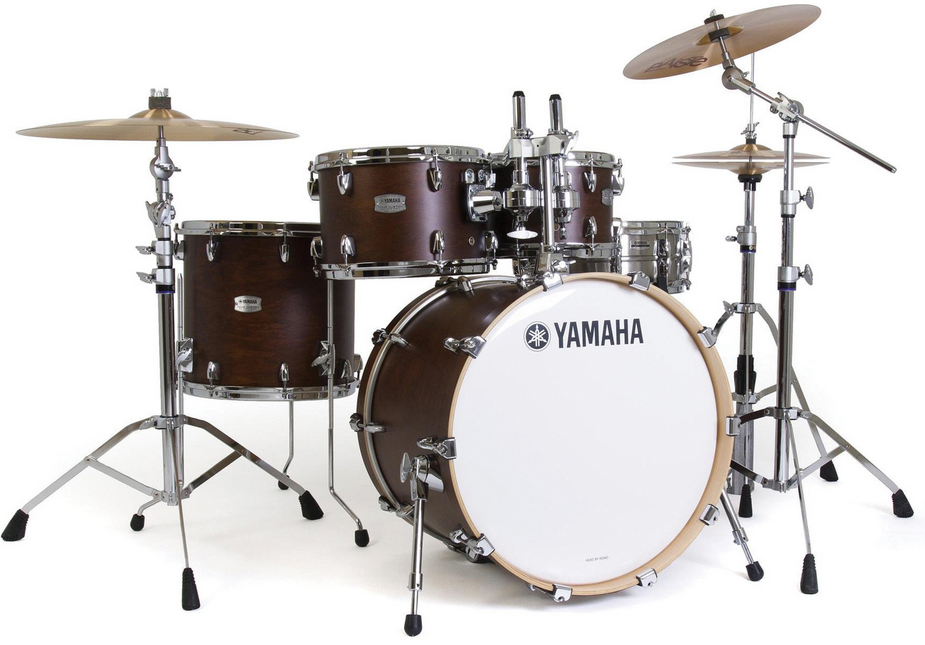 Perhaps have the accessory hole facing towards the drummer instead of the audience?

I think he means can turn it 180° so the accessory hole is facing you, which will allow you to slide the toms further down on the hex rod, thereby opening up the sound of the toms. They can be finicky depending on their placement on the hex arm. This would also allow you to back them off if you wanted.
You must log in or register to reply here.
Share:
Facebook Twitter Reddit Pinterest Tumblr WhatsApp Email Link
Top