Have to cross sticks for high hat/snare?

I've played open handed left for a while now and enjoyed some of the positional freedom it brings and certainly more relaxed postures as well in the open stance. Certain feels are better too for me and my 'back beat' right hand has an easier time for a variety of rim shot positions. For instance, if I want a hihat shanks on the thicker shaft and want a relatively hard hit rim shot close to cetner, left open is way easier for me and while keeping my hi hat pretty low. Doing this with a crossover right lead, I'd have to raise the hihat higher to make this reasonable but now for lighter tip playing, my right hihat lead is raised higher than necessary and I don't like this compromise ergonomics just for this particular sound choice. Having more room on the left side for bigger cymbals with contrast is a creative freedom I like having for whatever the music calls for. Plus getting both side to develop finesse and stamina has been helpful.

I still play right lead because that can still do better on certain feels and will still cross over for certain things too as I'm natural right handed...there are no rules and don't even really think about it at all, it just happens where is goes. But it took some forethought, experiments and experience to have time to develop it musically in order to get to a point of 'not thinking and just hit the drum'...I feel this yields more musical freedom when it counts in the end, not less.
C

Open handed is definitely a great skill if you have it.

GetAgrippa said:
So you folks never cross your arms playing? Doing the Dennis Chamber's crossover tom fills is too dang cool. I've set up my hats like that so less cross but mostly way far left so my hands cross but at wrists so no interference with my sticks (one wrist on top of other and waving my hands like a butterfly LOL). I play them open handed now some too-a recent addition.
Click to expand...

I use the aforementioned Bill Berry position/technique (seeing that was my inspiration for solving this exact dilemma at the beginning of my kit playing), except that I don't move my right arm out of the way for snare strikes. I play German (palms down) grip, which naturally has my sticks extending from my arms at a nearly 45 degree angle, so my right arm is naturally out of the way. My forearms are nearly parallel. I move my right arm slightly forward and rotate it sightly left, and it lands on the hats perfectly. When I return to both sticks on the snare, my arms are parallel and the stick tips are right over the center of the head. This (not the hi-hat part) is left over from high school marching band; my school's program hadn't switched to traditional until the early 90s. I've addressed this in more detail somewhere else here on Drummerworld, but I don't recall where/when.

I can also play open-handed leading with my left on the hats, nearly as well as right hand lead, except for the most syncopated and ghost-note-ridden patterns I play.

GetA - no, I do cross my arms sometimes when necessary, but only when I want/need to, not to ride the hats.


Uncle_MC said:
It's just one way how the instrument is played.
Click to expand...

I’m a beginner and find that when moving the left hand from snare up to 1st Tom that’s when I could do with not having to cross for the hi hat as the two sticks collide.
Alesis Strike Pro SE

Uncle_MC said:
This is it. I don't think I have ever even thought about this topic. What is wrong with crossing your hands to play the drums? It's just how the instrument is played. I feel like the modularity of the drumset lets people ideas run wild, trying to come up with various "solutions" to problems that don't really exist. You don't see these discussions with piano, guitar, and other "fixed" instruments. All of these people with center hi-hats must not be going to jam sessions or sitting in with people much.
Click to expand...

Umm...I think this is why open-handed drumming is very popular...to avoid crossing over. I just figured out a long time ago how to do it open-handed but still lead with my right hand. I do have to admit I have smashed my left hand with my right drumstick on more than one jam night because I wasn't used to the high-hat placement. I have to tell you what an amazing feeling that is. Better than coffee. It really wakes you up!
Check out my Limelight Drum Cover

Alex Luce said:
Umm...I think this is why open-handed drumming is very popular...to avoid crossing over.
Click to expand...

It's not popular among professionals I know! It's a rarity. The vast majority of them do their riding with one hand, and just move it to whatever thing they want to hit. Real simple, and requires zero extra practice time. They don't relearn all their stuff backwards just to hit a different part of the instrument. I'd rather use my time to learn new content.

It's really a solution a beginner's problem-- beginner's discomfort. They're practicing nothing but rock beats using the hihat, so they think that's what playing the drums is, and their technique isn't real good, so they're hitting their sticks and having a hard time. And just visually it makes more sense to hit the thing on the left with your left hand. But there's this whole vast system of performance vocabulary, based around a lead hand and the other hand-- that people have to get really good at if they want to play the drums well. In whatever style of music, it's all right handed.
Visit Cruise Ship Drummer! - a drumming blog | Get Cymbal & Gong cymbals

Yeah, you are right, I guess the idea is popular, but how many drummers are actually doing it successfully? Probably not many. I never thought of seriously trying. The only two drummers I can think of that do it are Akira Jimbo and Simon Phillips. But they are so technically far ahead of most drummers it isn’t even fair!
Check out my Limelight Drum Cover 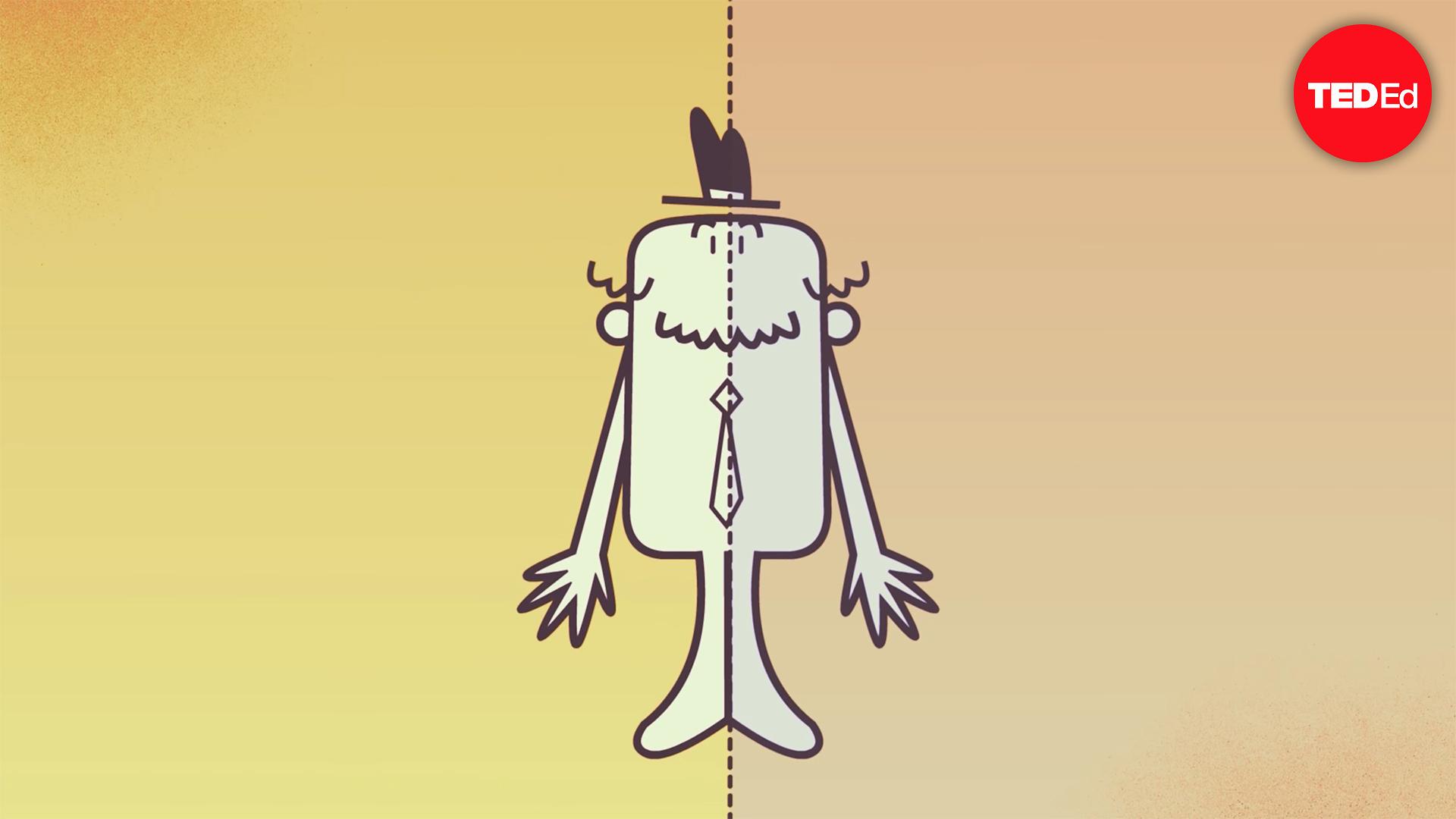 Why are human bodies asymmetrical?

Symmetry is everywhere in nature. And we usually associate it with beauty: a perfectly shaped leaf or a butterfly with intricate patterns mirrored on each wing. But it turns out that asymmetry is pretty important, too — and more common than you might think. Leo Q. Wan takes us into the human...

I have a weekly drum lesson together with two beginners. If anything, it's quite eye opening to see how difficult this instrument actually is when just starting out.

Sometimes when the teacher is occupied with some other student, I'll get a question from one of the guys on something so basic and elementary, I really get stumped in answering it...stuff that seems so natural to me and all of a sudden I have to really investigate and think about just how or why I do certain motions.
A lot of those questions are indeed about how to coordinate the hands between the hihat and snare. So after I "kind of" show them how it works, I inevitably end up saying "just keep practicing, eventually it'll work itself out".
“To be is to do”—Socrates.
“To do is to be”—Jean-Paul Sartre.
“Do be do be do”—Frank Sinatra.

Alex Luce said:
Yeah, you are right, I guess the idea is popular, but how many drummers are actually doing it successfully? Probably not many. I never thought of seriously trying. The only two drummers I can think of that do it are Akira Jimbo and Simon Phillips. But they are so technically far ahead of most drummers it isn’t even fair!
Click to expand...

And Billy Cobham and Lenny White. I think us normal humans usually need to economize our practice time for the best real effect.

I do see more of it than I used to-- I guess people have more time to practice now. There's I think one excellent drummer in Portland who plays that way.
Visit Cruise Ship Drummer! - a drumming blog | Get Cymbal & Gong cymbals