Well, I went to the drum show today and have news to report. Played lots of drums and overall, many of them sounded like drums. Notable drums were Daville Drumworks, Kumu, and Jenkins Martin. I did play a new Recording Custom as well. Do you want to know what they sounded like? They sounded like drums. If anyone is following the thread about Recording Customs being worth the price, they aren't. Sorry Yamaha fans, but they look and play like a mid-level kit. Save your money and buy a Saturn or B/B Performer kit.

Anyway, when I go to the show I like to pick a "best of show" manufacturer/kit. The Jenkins Martin fiberglass kit sounded crazy. Lots of punch with a slight "acrylic" sound but because of the heads (EC2 Clear over EC2 Reso) they were massively deep sounding. But for my Best of Show pick I'm going with the new guy, the Cinderella story, the guy who literally is starting his first day of business at the Chicago drum show, i'm going with Inde Drums.

You have never heard of them because they literally opened their doors today, May 21st. Why do I choose Inde Drums? First, the owner/operator (Josh) was a former Ludwig employee who designed the new Atlas hardware, including the Atlas mount that has been coveted pretty much everywhere and the new Atlas snare strainer.

Secondly, he has used his connections in the drum industry to develop his own line of completely custom hardware (lugs, mounts, strainer). I took some time to chat with Josh about the hardware and he was saying how he doesn't believe in any rubber on his drums. No gaskets, no damping, nothing. He also designed his lugs to have minimal shell contact, so they are a bridge style lug with brass inserts and a nice chrome plating. He doesn't believe in Rims mounts either because his time at Ludwig showed that the rubber in them (and in the Atlas mounts) creates an oscillation in the drum where the rubber absorbs the resonance of the drum. So, Josh has developed a new mount that bolts directly to the shell, but has the ability to be tuned to more or less resonance and stability based on the size of the drum and the use that mount is designed for. If its for a floor tom, you adjust the mount to allow for maximum movement and resonance. If its a big tom, you may want to adjust the mount for more stability. Small tom, adjust it for more bounce. Very cool design and so stupid simple you wonder why no one else invented this earlier.

Third, he is working with Keller and has developed his own custom Maple shell configuration that they are building just for his drums. They are a 5 ply shell with thick plys for all horizontals and thin plys for all verticals. No re-rings because they are a thicker shell than Keller's standard 5 Ply shell. Overall they are nice and resonant drums with a nice punch to them. Slightly short noted, but that could have been the heads. So there are no stock, off-the-shelf parts on these drums.

They are only offering matte finishes and chrome hardware at this time in an effort to keep costs down so their drums are affordable to the public and not just the rich folk looking for a custom kit. A 3 piece kit (bass, rack tom, floor tom) is ~$1500. I have priced out the off the shelf parts for a 3 piece kit and they are $1300 using the cheapest sources I can find. So, for a kit that has totally custom hardware and is designed by a former Ludwig employee who brought you the new Atlas hardware, that's a pretty damn impressive price. If I didnt already have 6 kits, I might have put some money down to buy a kit. I did buy one of their strainers and butt plates for one of my snares.

Keep an eye out for these guys. I foresee good things for them. 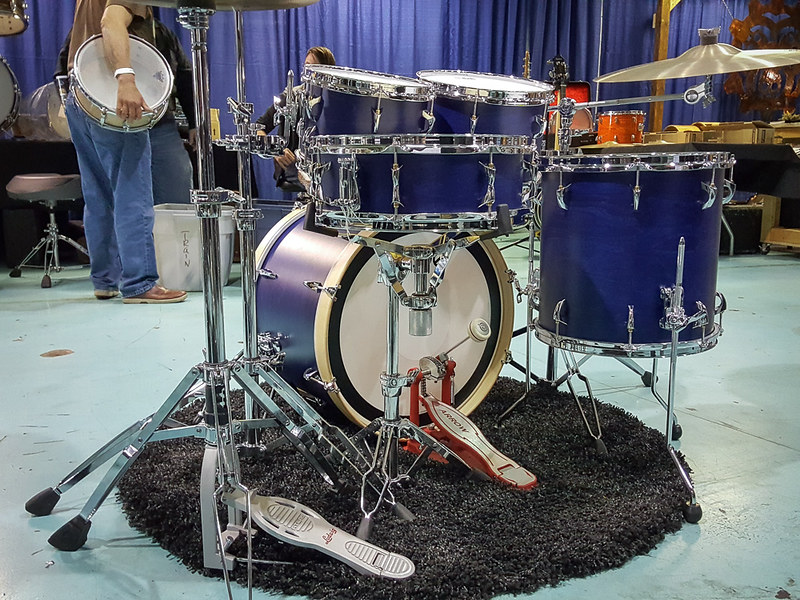 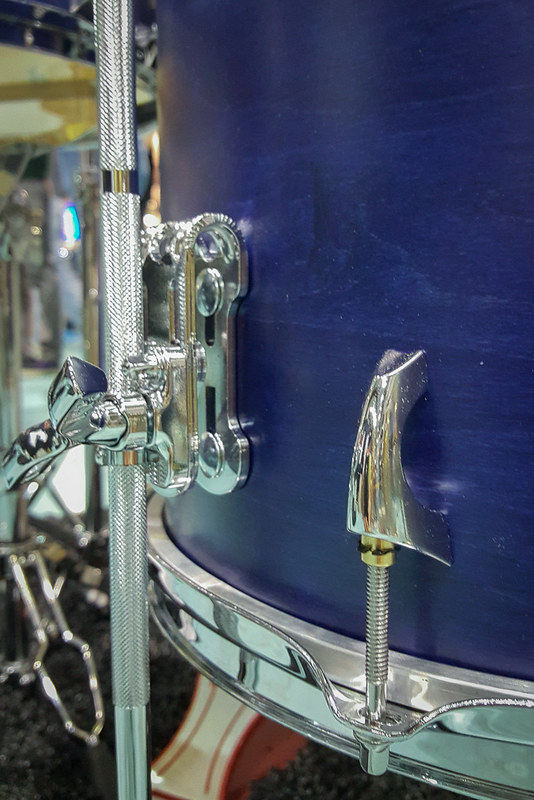 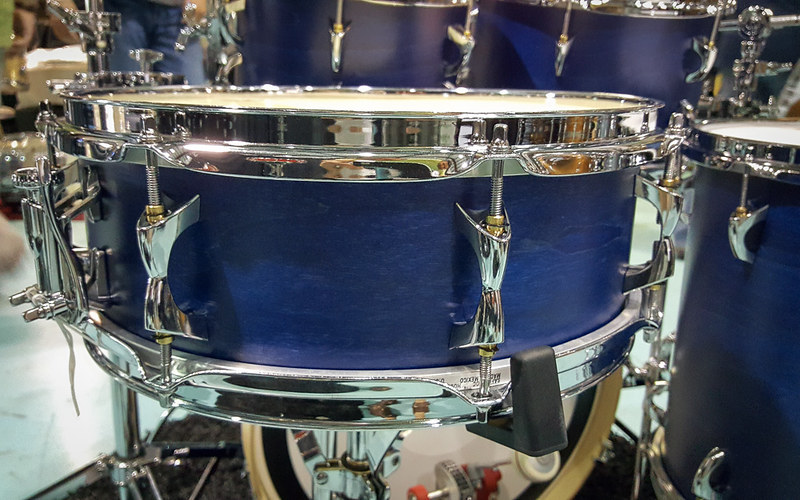 Good Luck to Josh.
This is a tough time to start a drum company.

Those look awesome Tommy. I love the hardware.

Thanks for the heads up. I really like what I'm seeing so far:
http://www.indedrum.com/new-index/#/suspension-isolation/

Very cool hardware/suspension designs.
It's worth a look around the site.
zpg.org
sisu
K

I like the look of the Inde kits. To my eye, it has a modern vibe to it. The asymmetric arch with the split head/tail lugs are sexy, and the fold-over formed floor tom lugs look like they might be interesting and provide a degree of isolation.

I' love to hear it to see if the sound lives up to the looks.

It's also neat to me because it almost looks like the lugs are folded and cut sheet metal rather than a casting. I'd love to see if this is true, and what effect it has on weight/longevity/price.

The floor tom leg mounts are the same as the regular tom mounts and tbe bass drum spur mounts. The are made of, what looks like, 3/32" thick chromed steel (maybe stainless) with a rolled bead in them for added ridgidity. The mount was very solid but because the post/leg crimp piece is on a slide within the rolled mount piece, you can make the mounting ridgid and firm, or bouncy and loose. Josh didnt have any special feet (that I saw) on the floor tom legs and they sang nicely. The floor toms could also wobble around a bit because he had the mounts set to full loose. Slide the crimp piece higher in the mount and it firms it up.

As for the lugs, they were diecast. You can fit a full finger under the bridge portion and pick the drum up from them, if you like. They did look light weight though. Everything about the design of the lugs and mounts ( oh yeah, the bass drum claws are custom designed as well) was meant to be low mass and low contact.

I do have a video of a guy playing on this kit, but it was shot on my phone and I imagine the audio quality is crap.

Staff member
At last - someone producing drums encompassing a number of well established principals, & taking those principals as far as can be included in an affordable package. I like this - I like this a lot. Josh - I applaud your decision to swim against the tide in some key areas, and your clear design / business direction. I wish you all the luck & success your business deserves.

A friend of mine is a former bandmate and roommate of Josh and was telling me about this venture the other day. I really found his hardware design to be impressive and I dig the lack of unnecessary rubber.

I'm glad this is getting such positive interest, I'll see if I can pass it on.

Thanks for the mention of Jenkins-Martin drums. I didn't get to go this year after a four year run, but I feel we're putting out an exceptional drum shell that is totally unique. For any other info, check out the link in my signature. Btw, did you take any pics at the J-M booth? If so, can you post any? Thanks.


Greg
"Failing to prepare is preparing to fail". John Wooden

Thanks TommyD for the post, and excellent recap of what we are doing at Independent Drum Lab! I will try to stay up to date on this thread and answer any questions anyone might have. Please come check us out today in Chicago!

I spent several hours at the show yesterday and I agree INDe and Jenkins-Martin stood out. Both have very motivated and detail oriented owners dedicated to delivering a superior custom product. For years I've been looking for a custom maple set at a reasonable price and I think Josh at INDe is the person with whom I want to work; very impressive young man. I'll probably combine the set with a Jenkins-Martin snare.

Nice review Tommy and great looking drums. I was all set to be at the show this year but ended up gigging over the weekend here in Michigan. Congrats to Josh on the launch of your company!

I cam up from Florida to go to the show and played all three of the kits INDe brought. I agree they were all pretty good, but I was especially impressed with the "large" sound of the small bebop kit (the royal blue one shown in the forefront of picture). Fit and finish was excellent, as well. The guys manning the booth were super cool and friendly. If they are any indication as to how the company is being run, they are in good shape.

I was also very impressed with the kits from the Chicago Drum Company, the snares from Infinty Drum Works and Beat Boogie. Also, the red finish on the new retro Sonors is absolutely beautiful, pictures in the magazines do not do it justice.

All in all, a great show. If you have never gone, put it on your bucket list. I probably played 20 different kits, 30 or more snare drums and saw/heard another 50+ being played by other drummers and met a lot a great people in our industry. And pretty much everything there is for sale, at a discount. I came home with three new snare drums.
Mike Plays Drums
S

I was there Sunday. Definitely a lot of drums that sounded like drums haha

KamaK said:
I like the look of the Inde kits. To my eye, it has a modern vibe to it. The asymmetric arch with the split head/tail lugs are sexy, and the fold-over formed floor tom lugs look like they might be interesting and provide a degree of isolation.

I' love to hear it to see if the sound lives up to the looks.

It's also neat to me because it almost looks like the lugs are folded and cut sheet metal rather than a casting. I'd love to see if this is true, and what effect it has on weight/longevity/price.
Click to expand...

I'm guessing a laser cut blank and formed in a die or brake press..?
Nothing wrong with that! Tried-n-True.

Much less expensive than a casting, and the generous form radius will allow a long life with very little stress build up.

Very nice drums, friend! Congratulations on a successful launch and all the good press.

Good! I'm sick of suspension mounts and I've been ranting for ages about how they look horrible, and dont really make a difference. Sure, to some waveform on a computer, but in reality you don't notice a difference.