Bringing an electronic kit on a trip (for practice)

So, here is my mission: I want to find a way to practice as realistically as possible while on a business training endeavor for 2 weeks.

I will be stuck in a hotel room for two weeks doing some training for work, and the idea of not being able to practice grates against my soul. Being away from my normal setup where I am able to shed for a few hours a day on my acoustic kit gives me severe cognitive dissonance, so I figured I would try and source an electronic and see if I can stuff it in a suitcase. I need to consider weight, as there is a limit of 50lbs for checked luggage, and the electronic kit would need to be able to be broken down into a large suitcase.

Has anyone ever done anything like this? If so, what E-Kit was it and did you have any headaches in the process? I once took my DW practice pad kit with me (throne and pedal included) to Hawaii, and that helped keep me from getting too rusty, but I am keen on seeing if I can do this with as realistic of an E-Kit as possible.

The price range for the kit is 1.5K-2K as I also plan on using it as a home practice solution too, so I am willing to invest.

The only other option to this would be maybe renting an electronic kit for a couple of weeks from somewhere? Not even sure if that service exists. Renting studio space just for jamming would be a bit too pricey I think.

I really don't think an e-kit and realistic practice belong together. If you want to compensate because of living in a small apartment in the middle of a city, nothing but TOTL will do.

Though they pack up smaller than an acoustic kit, they're not exactly hassle free.

I've never owned an electronic kit, but it's not like I don't have access. I have them at work and I'm forced to use them for teaching sometimes.

It sort of depends a bit on what type of practicing you'll be doing. What size of kit you feel you need etc...

I had to come up with a solution as well, but I quickly found out the feel was the most important thing and ended up going with practice pads. L80s, a Xymox pad and a Super-Pad for bass drum. I've got Super-Pads to cover or replicate my entire acoustic kit, but I stopped using them. I just adopted my practice when travelling, so it's based on what I can do with just snare, ride, hats and bass drum. The Xymox doesn't hurt my technique and I also use a Brush-Up pad. Of coure, if I want to practice some movement I'll bring an extra pad or two.

I live Norway. My small town obviously doesn't have rehearsal studios for rent, but when I go to a city they're available. It's about $10 an hour for a small room with kit, so it's not so bad. The extra things a drummer might usually bring, like cymbals, you can rent for an additional $2 pr day.

How about Yamaha DTX Multi 12 and two e-pedals ( hihat and bass), very portable and should suit your purposes.
G

Take the DW practice pad kit. Save the cash for more cymbals or snares

Staff member
Buy the kit where you are going, and then ship it home. One way shipping fee.

I have a Yamaha dd65 that lives in a suitcase. My friends use it for restaurant gigs. It cost about USA $ 200 about 8 years ago.
M

I have used various e-kits through the years, and packing them away in a suitcase is not really an option. I do not think there really would be a way to bring something light weight enough to mount the pads. I would also be afraid of damaging the module. I would go the route of a practice pad

This is a pipe dream. It sounds maybe feasible, but the bulk/weight, and noise will be your major hurdles. For context, I've been in my hotel room during the evening using my pretty dang quiet gum rubber vater practice pad and had noise complaints to management. E-kits are significantly louder than most people assume, and the vibration from hitting things travels through walls. Consider that you need a large rack setup or at a minimum stands to mount all the pads

Also, you're not going to lose your abilities during a 2 week business trip. Suck it up, grab a practice pad, go on your trip, and work on your hands. If you really need to, it's not that big of a deal to bring a pedal and bass drum practice pad thing. I just think you might be worried about a non issue. Bring a pad, work on your form, and realize your super drum skills aren't going to fall apart from a short break away from the kit.

Lastly, over that much time frame, you can often find a local music shop that has practice rooms with kits already setup or able to be rented by the hour. Really depends on location obviously but it can work.
C

I have recently transitioned back to an acoustic kit after playing various e-kits for more than 30 years. From my experience, I've never felt that playing an electronic kit helped me to play better on an acoustic kit, and vice versa. They are different animals that require adjustments to your playing and technique. Electronic drums served me well while living in an apartment and playing at home during a time when I had young kids and needed to keep the volume down. However, I really had to re-learn proper technique when I went back to playing an acoustic kit full time. Since you'll only be gone for two weeks, I'd bring a practice pad and work on something specific you want to improve. View this as an opportunity to focus on or further develop something you need to work on to make you a better player when you get back home.

I do have the DW practice pad kit, and have used it on trips before - it works, just looking for something more realistic. The idea was that if I wanted to invest in an E-Kit for home use (I have a rented space for my acoustic kit) maybe I could kill two birds with one stone and find something that would fit in a suitcase.

I would be in the San Jose area and there IS a guitar center not far from me.... maybe I could rent something from them.

The idea of being stuck in a hotel room for two weeks doesn't appeal to me either.

Renting a room ar a practice studio would be the be best for realistic practice with the least hassle. I'd still bring a pad.

For home I think it's persoal taste. To me the feel was the most important and having the electronic sounds wouldn't add anything. What did make a difference was real hats and ride in form of the L80s and finding snare and BD pad solutions that also felt right.

RickP said:
How about Yamaha DTX Multi 12 and two e-pedals ( hihat and bass), very portable and should suit your purposes.
Click to expand...

I have this and use it a lot, even with an acoustic kit set up: 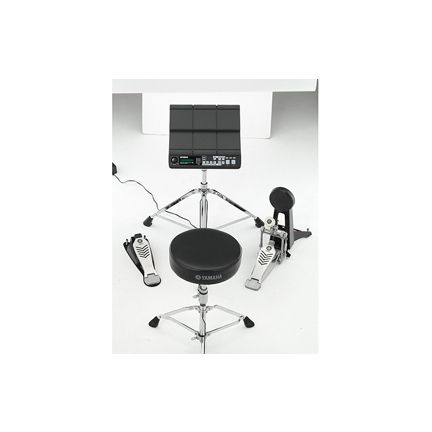