K.. I've been playing forever, use matched grip, 2nd finger/knuckle fulcrum etc. basically the Dave Weckl/ Jim Chapin philosophy about hitting the skins. So.. the other night, like I always do before a gig think about playing tight and in the pocket with loads of groove and dynamics (just a little mantra I use !).. and while I was playing it dawned on me how important the arch of your palm is to making everything work the way you want it to.

Adjusting the inner arc of the palm eg. grip the stick with a shallow arc around the stick.. so your palm basically envelopes the stick.. this also dramatically changes the sound the stick produces - kind of a dark sound. And.. if you think of the inner palm being arched slightly so the stick is more freely moving on the fulcrum.. the flow seems more direct and immediate with a much brighter sound.

Try it on a closed hat.. play a groove and adjust the arc of the palm around the stick.. the difference is amazing and a lot of fun to play around with!

I do remember a video of Jim Chapin where he does appear to play with a heavy arch in his palm, first finger hanging down loosley and the stick pivoting freely.. so I don't think this is anything new.. but it is fun to play around with different grip techniques!

After I started encorporating more rebound control into my technique, I started to notice that my hands started to resemble Keith Carlock's hands. I play thumbs up 90% of the time and about half the time my palms don't make any contact with the stick at all. If I'm playing louder, wrist technique sort of stuff then I use a more static grip and my whole hand, including the palm, loosely makes contact with the stick. But if I'm doing quicker, finger technique stuff, then most of the time the stick just floats between my thumb on one side and the rest of my fingers on the other. At those times my palm is very arched like you are talking about.
M

When I used to play traditional grip, my left hand would sometimes just be one pivot point in the nook of the thumb/first finger joint. even though my fingers were in position to cradle it.. and sometimes for more control the top 2 fingers would rest on the stick.. so it's probably the same principle.

Maybe even the same idea behind burying the beater vs. letting the kick pedal swing freely off the head. (I don't mean by arcing the foot (!) but less resistance and more bounce).

Absolutely - the natural, relaxed, neutral grip has an arch to it. If you clench your fist, you activate the muscles on the underside (palm side) of your forearm, and your hands gain extra curl. If you flatten your hands out, you activate the muscles on the top side of your forearm and your the curl disappears. Neutral position is about halfway between the two. I like to think of the hand as a claw with a thumb. The bones themselves are more or less straight, the curve is to be found in the neutral resting position of the joints.

The reason this is so important has less to do with the physical structure, however, and more to do with the concept of tensegrity. When one area of the body is tensed more than it should be, then movement in other parts of the body suffers. IU discuss this at length in my book

You don't want to actively arch the hand, just allow the arch that should be there to exist. Pianists often are taught to imagine they are holding a ball while playing in order to maintain neutral wrist. Sometimes this works great, but often it leads students to extra tension becuase they imagine they have to hold their hand in that position - they don't because it holds itself there. That is why it's the neutral position. Also, it is worth noting that the neutral position of the hand has a curve front to back AND from side to side.

Here is a pic of neutral position in a wrist brace. Note that the wrist itself is NOT in neutral position for some reason. It is bent more than it should be. Not by a lot, but by enough to make using this brace uncomfortable after a while. 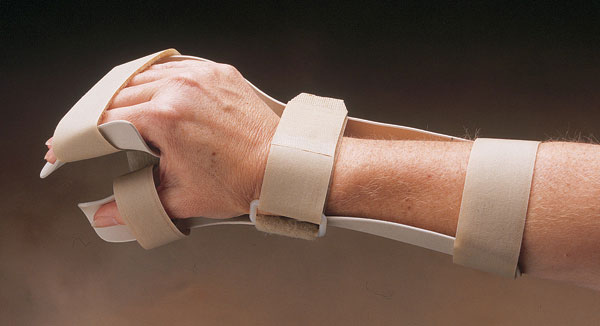 John Lamb said:
The reason this is so important has less to do with the physical structure, however, and more to do with the concept of tensegrity. When one area of the body is tensed more than it should be, then movement in other parts of the body suffers. IU discuss this at length in my book
Click to expand...