It's happened to me twice now, where I show up to a venue that uses clip-on mic holders that are not compatible with the S-Hoop shape, so during short changovers, I've had to work with the soundperson to come up with a work-around.

I love these hoops and use them on both my snare batters. There was a point when I considered putting them on my tom batters too, but was too nervous about this very scenario. I'm glad I didn't now!

I really like the added mass focusing the tone without the dryness that comes from die-cast, but what I like most is the feel of playing them. Part of that is the comfortable stick-saver nature of them, but the bigger part is that they don't sit as high above the head as most hoops, so you get more stick contact with the head during rimshots. Now when I play a snare with a standard hoop, I feel like my stick is digging in at a hard angle just to get the head.

Now I'm trying to find another hoop that does the same thing with a clip on friendly shape. Something higher mass with a lower profile.

Anyone got any ideas?

Staff member
Yes, clip ons are the challenge, but there are a few variants that work (ish). Frankly, mini mic boom stands are cheap, & both better & faster to change from kit to kit.

As for variants, there are various stick saver designs out there, some have similar mass, non have comparable rigidity. For the very reasons you state, we fit S hoops to our Tour series drums as standard. They're perfect for life under mic's too, just a pity they're not standard mic clip friendly.

Thanks for the reply, Andy. I was hoping you'd chime in on this one. I agree it's a shame this situation exists.

If I was in a band where we did our own sound, no question I'd have these hoops on every drum. Unfortunately, that isn't the case and I usually have no idea, or control over, what equipment a given venue will have at their disposal to mic me up.

I have a few mini-mic stands that I could schlepp with me to every single gig for that rare case where they only have clip ons that my hoop renders useless. However, this last club had some unusual (for me anyway) mic clip on system where the clip and mic were integral. I'm not sure I could have mounted that mic in a standard clip since the mic itself was this fat stubby thing. Not sure if it would have worked.

But for bullet-proof simplicity, and freeing myself from the worry, I think I need to just replace my hoops.

DW has what they call a TrueHoop (as if everyone else's hoops were a pack 'o lies!) that are 3.0 mm with a fully rounded top flange. I don't know about the profile, but as it stands now, they're my frontrunner.

Unless someone can hip me to something else.

I use SHoops on top, but keep the triple flanged on the reso side. THe workaround I use is that I attach the mic holder to the bottom hoop, no issue!

Bring your own short mic stand with you and voila.

You could go with 3.0mm triple-flange hoops. They have 'em in tons of sizes at Drum Factory Direct.

There are also Pearl Fat Tone hoops which are lighter than S-Hoops, but I liked em a lot on my kit. Those are available at Drums On Sale.
D

I also play with a snare with wood hoops and there is no way to clamp anything on it. But I have avantone proklamps and I flipped one of the arms around and clamp it on the rack tom with the mic aiming for the snare. Basically , the snare mic is clamped onto the rack tom.
S

drum4fun27302 said:
Bring your own short mic stand with you and voila.
Click to expand...

Exactly! Two of my Gurus have S-hoops, which are perfect for those drums. I spent a nominal amount for a short mic stand. The benefits? No extra mass on the shell and no worries about a clip-on mic getting in the way. Better positioning options and the stand doesn't weigh much. Love clip on mics for toms but a stand for the snare is how I roll now. Hanging a heavy, clunky SM57 or Audix i5 off of a snare's hoop is a bad idea.

Rather than carrying a mic stand around, why don't you find a mic clamp that will work, and bring it to gigs.

E.g LP claw mounted up from the bottom rim, or the Shure A56 mic clamp which can adjust to attach to a tube or a rounded rim.

For a while I used a clamp on my hihat stand to mount my snare mic. Added benefit was no extra weight on the drum. I always keep a '57 and a clamp in a pocket of my hardware bag, just in case.

And otherwise, this Rim Riser could be handy too:
Intended for a thicker x stick sound, but it also works for clamping the mic, or even both. 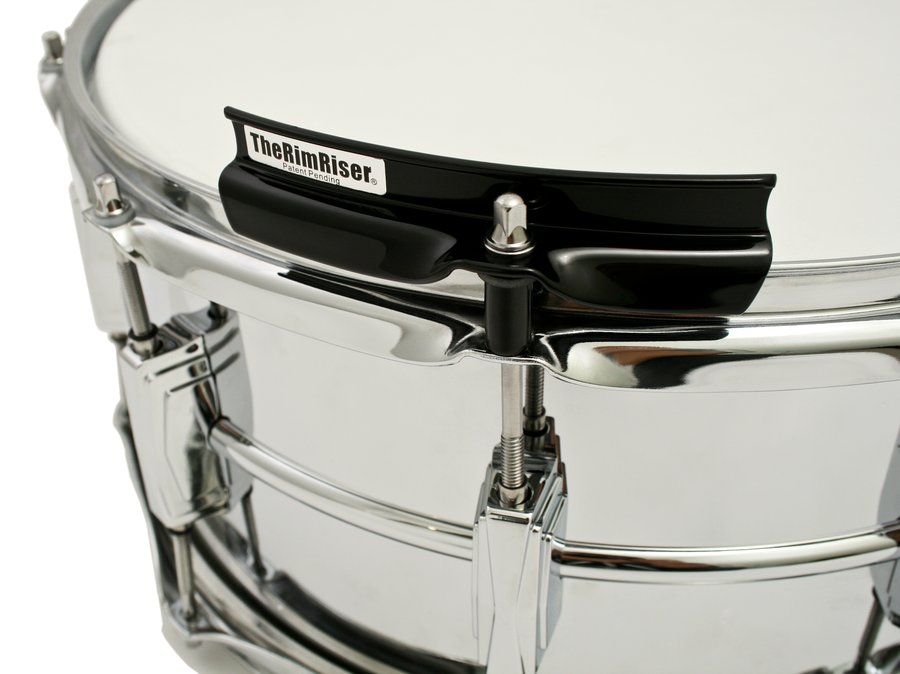 I have had this issue a few times . I ended up using the Acro that I bring as a backup. I recently went back to diecasts. Some clips won't fit on my Coliseum's diecast hoop, either.